“As Gruevski’s days are counting down and our eyes turn toward Macedonia, I hope that the beautiful image of the Macedonian and Albanian flags together will meet a real awakening that would be an example to be followed, not just in Macedonia but across the Balkans,” writes Alida Karakushi.

While the events keep unfolding in Macedonia, and the opposition lead by Zoran Zaev has announced major protests for the 17th, Albanians of Macedonia are still not clear about who to support or believe. The Kumanovo police/army intervention that destroyed an entire Albanian neighborhood might have been a plot aimed to divert public attention from the shocking scandals which emerged out of wiretapped recordings and reveal the degree of corruption in the state.

Prime Minister Nikola Gruevski acted as if the government knew of an alleged terrorist group from the moment they entered the country, but coincidentally only decided to act on this knowledge the day after massive protests against his leadership. Also coincidentally, all of this happened the day after citizens of Macedonia (Macedonian and Albanian alike) protested together for the first time. The recorded conversations have demonstrated that fascism is an integral part of this government. The recently resigned Minister of the Interior Gordana Jankulovska can be heard on what such recording saying, “I can wipe out those indians in an hour,” referring to ethnic Albanians in Macedonia, the implication being, presumably, that Albanians, like “indians” are primitive. Other suppressed reports show that there have been several cases in which the government may have tried to catalyze ethnic conflict intentionally. It is not hard to conclude that this government is working to further disintegrate its own society, not just institutionally but also socially.

Today’s critical situation in Macedonia is a result of many dynamics. Seen from an international relations perspective, some additional coincidences of the date of events in Kumanovo cannot be ignored. The 9th of May is the day of the European Union, as well as Victory in Europe Day – the same day that Macedonia’s Prime Minister returned from Moscow, where he attended Putin’s military parade. Russian interest in Macedonia intensified when Bulgaria refused to accept the South Stream pipeline project. In fact, the itinerary of the pipeline, should it materialize, would literally extend Russian influence throughout the Balkans, as it would pass through Turkey, Greece, Macedonia, Serbia, and Hungary, in order to access the central European market. The EU doesn’t seem particularly interested in Russia’s monopoly of the gas supply, though EU officials do oppose the plan because it does not comply with the regulations of the EU’s liberalized market. Seen through this lense, it isn’t difficult to understand why Russia’s response to the events in Kumanovo/a have frequently included the words “Albanian terrorists”.

However, the EU’s role in the Balkans has stagnated in terms of further integration and enlargement. Simply put, it seems that the later one joins the EU, the more concessions are necessary: either one must give up one’s name (the Macedonia-Greece problem), a piece of territory (Croatia granting sea access to Slovenia), and I expect that Albania will finally need to fully “agree” to its territorial water agreement with Greece before any further talks about EU accession. This is only one side of the very complicated sui generis European Union. The democratic deficit the EU suffers from might also have to lead to further “contracts” with existing member states. No matter the rhetoric sold by the EU, its member states are still unitary actors following their own national interests. Because of this, the citizens of Macedonia (Albanians and Macedonians) find themselves in a vicious circle, blocked both naturally (landlocked) and literally by their own corrupt government. The EU’s foreign policy in the Balkans keeps prioritizing stability over democratization.

Regarding the recent events, the EU’s enlargement commissioner Johannes Hahn urged that the killings “not to be seen as an opportunity to avoid fundamental problems that the country is facing.” The key words of his response were “stability” and “cooperation”. No declaration was given by the EU on the previous massive protests where Macedonians demanded the resignation of the corrupt government. Furthermore, Brussels’ call for cooperation between the opposition and government could raise the ire of people in Macedonian. While the EU evidently must be careful in its declarations, the call for cooperation between the opposition and the current government seems to be driven by the prioritization of stability over justice.

In the aftermath of Kumanovo/a events, Zoran Zaev visited the destroyed neighborhood and was applauded by local Albanians. The Albanian leaders who have helped Gruevski stay in power were, on the other hand, evicted from that neighborhood. A video which showed an ethnic Albanian expressing his view that the problem in the country is not Macedonians but the corrupt government, and which ended by him being hugged by a Macedonian went viral online. Social media helped break the blockage of information by the media and allowed citizens to mobilize. Albanians however, wonder about the agenda that is being set by Zaev’s revelations. They are particularly interested in the many cases where Albanians have been accused of crimes and portrayed as terrorists, the details of which remain hidden from the public. One particular case Albanians are interested on is the so-called “Monstrum” case, where ethnic Albanians were accused of killing five Macedonians in Smilkovc in 2012.

Being a civil society activist myself, if I was in Skopje today, I would launch the idea of an integrationist movement, a movement that tomorrow would join the protests not in the name of Zaev but in the name of  the real spirit of solidarity between Macedonian citizens, with ethnic Albanians as an integral part. This movement could one day formalize itself as a party. Is Macedonia ready for such movement? I am not sure. My Albanian and Macedonian friends in Macedonia probably know better than me. However, in light of revelations that show how the government uses nationalism and ethnic conflict to stay in power, and knowing that current Albanian leaders have also used false appeals to nationalism in order to have a piece of the governance pie, such a movement would seriously threaten the current corrupt political class. As Gruevski’s days are counting down and our eyes turn toward Macedonia, I hope that the beautiful image of the Macedonian and Albanian flags together will meet a real awakening that would be an example to be followed, not just in Macedonia but across the Balkans.

It’s time to act yourselves, citizens of Macedonia! Do not wait for the EU, Russia or anyone else, you have the power and the right motivation inside you! 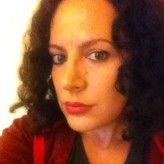 Alida Karakushi is a Fulbright scholar from Albania currently pursuing a master's degree in Public Policy at Oregon State University. Alida holds a bachelor's degree in Political Science from the University of New York in Tirana. She regularly contributes articles on current social and political issues to the Tirana Observer, Gazeta, and Gazeta Idea. Her blog "The Art of Living" has given a voice to those in Albania who consider the conventional media's role too circumscribed by business and political interests.