In a wonderful show of support for the right to freedom of expression on Sunday, world leaders descended on Paris to participate to march in solidarity with the people of France.

This event would have been even better if the leaders in question were not so selective in their support for freedom of expression. As Daniel Wickham pointed out in a long sequence of Tweets, many of those attending the march have in recent years overseen the imprisonment, torture or murder of journalists.

This of course makes for a pretty weak gesture. When Benjamin Netanyahu, Sergey Lavrov, and Ahmet Davutoğlu march in support of free speech, they are disrespecting everybody who has died for their right to do so. But rather than dwelling on the hypocrisy, it’s worthwhile to consider how to move beyond it.

The first order of business would be to release political prisoners. These would include journalists such as Aziz Kayed, Ahmad al-Khatib and Mustafa al-Khawaja, Hatice Duman, Mustafa Gök and Cüneyt Hacıoğlu; Sergei Reznik and Aleksandr Alesin; the staff at the Syrian Center for Media and Freedom of Expression; Abduljalil Alsingace, Ahmed Humaidan and Hussein Hubail. A broader campaign supported by the attendees of the march could lead to the release of Khadija Ismailova, Eskinder Nega, Jean Laokolé, Mohammed al Maqaleh, Muhammad Anwar Muna, Chelsea Manning, and various other political prisoners.

Once this has been done, the universal adoption of new standards and practices around freedom of expression would be a good move. This could include such radical concepts as eliminating imprisonment as a punishment for libel, decriminalizing blasphemy, and repealing any laws which restrict media activity. This could mean a sane libel law in the UK, the liberalization of religious speech in Ireland, and the elimination of the media censorship committee in Hungary, among other great things.

The next appropriate step would be to put in place appropriate safeguards to protect the global communications infrastructure from attempts at censorship and selective availability. This could be done by enshrining the principle of network neutrality in law, repealing existing Internet censorship laws, and reforming copyright to prevent DMCA-style notice and takedown procedures from being used as a general purpose censorship device.

There are of course many other things which need to be done, but this would be a good start. How about we set some deadlines? We could agree for instance to release the prisoners by the end of January, complete the legislative reforms by the end of 2015 (it is understandable that these things take time), and then perhaps these righteous world leaders could meet again in Paris in January 2016 for a summit on where to go from there.

Alternatively, the hypocrisy can continue.

This article was originally published on Smári McCarthy’s website. He has generously given Balkanist permission to reproduce it here. 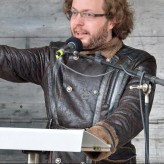 Smári McCarthy is a free software developer, information security geek, and political activist. He works on decentralizing the Internet, increasing democratic participation and self-determination. He is chief technologist at the Organized Crime and Corruption Reporting Project and a board member of the International Modern Media Institute, amongst other things.