Will Serbia choose to engage in a series of reforms required of future European Union members while a resurgent, saber rattling, nationalistic Russian patron is on the move?

During Vladimir Putin’s remarks before the Russian parliament this past week to declare his annexation of Crimea successful in the aftermath of a plebiscite with winning results in excess of 90 percent, he revealed a newly embraced nationalism for a resurgent Russia.  He also announced his exacted vengeance for Serbia’s loss of Kosovo in the crudest terms.

Putin mentioned Kosovo frequently throughout his speech; and exacting his revenge for Serbia’s loss was apparently a desire he had harbored for a number of years.

Columbia Professor Kimberly Marten pointed out Putin’s unvarnished embrace of Russian nationalism during his Duma speech when he referred to Russians as “Russkii” for exclusively ethnic Russians, as opposed to the customary reference of “Rossisskii” when acknowledging anyone who had a a Russian passport, in other words, a Russian citizen, irrespective of ethnicity.

Marten drew a plausible parallel to Slobodan Milosevic’s ethnic nationalism project to violently create a “Greater Serbia” as he led Serbs through a series of wars that slaughtered thousands of people and destroyed Yugoslavia.

But now a resurgent Russia has fully emerged, led by strong man Putin who appears to be not only omnipotent, but is bent on righting past wrongs carried out against Russia. His paternal declaration of protection for his Serbian slavic brothers was an unparalleled throw down and upends Europe’s previous policy overtures to draw Russian into its organizations as a western leaning partner.

These revelations should be a wake-up call for the Europeans.

Herein lies a defining fulcrum — that of the historical Slavic ties between the Russians and Serbs that runs deep with several centuries shared between them and notable for opportunistic manipulation of one another. Harkening back to the Vienna Congress of 1815, is just one example when Russian Tsar Alexander made clear in a diplomatic note circulated to delegates:

…calling attention to Turkish atrocities in Serbia, Alexander stated that [as] the emperor of Russia [he] was the natural protector of the Orthodox Greek Christians under Ottoman dominion…and the note concluded that Alexander was obliged by his religion and the voice of conscience to go to the aid of the oppressed Serbian people.

Timing is everything in geopolitical affairs.

The Crimean referendum was not the only election held on March 16.  On the same day a new Serbian government was elected that is expected to be led by Aleksandar Vucic, a populist and a political son of Slobodan Milosevic (Vucic was his Minister of Information).  Vucic, a former nationalist hawk, ran a campaign that called for Serbia to join with Europe and resolve the Kosovo issue, a sharp juxtaposition with Putin’s claims that his violent takeover of Crimea was an action to settle scores over on behalf of Serbia.

Will Serbia now choose to move forward and engage in a series of reforms required of future European Union members? Will they make peace with Kosovo while a resurgent, saber rattling, nationalistic Russia patron is on the move?

The Serbian Ministry of Foreign Affairs recently tweeted its complete support for Putin’s actions on Crimea and Ukraine on March 3, but later tweeted declaring its neutrality, claiming its internal problem of Kosovo remains to be solved.**

On the issue of Kosovo, the Serbs have always been supported by the Russians as evidenced in the UN Security Council during the Balkan wars where the Russians effectively used their veto powers to block action, or watered down resolutions against the Milosevic regime. Likewise, Russia has played a similar role in the permanent council of the Organisation for Security and Co-operation in Europe, which operates on the basis of consensus.  Russia has effectively blocked Kosovo’s OSCE membership despite years of reform and international oversight that was carried out before its independence was declared in 2008.

It appears that Belgrade is juggling its European agenda while maintaining a friendship with Moscow.

Over the years, but more frequently since 2012 when Putin returned to the Russian presidency, officials from Moscow and Belgrade have been frequent fliers in a concerted effort to curry favor and deepen their ties.

Awkwardly at times, Bosnian Serb interloper Milorad Dodik, the premier of the Serb entity in Bosnia and Herzegovina has also been a presence in Moscow.

In the week before the Crimea referendum, Dodik traveled to Moscow where he was presented an award by the Russian Orthodox Patriarch Kirill “for his outstanding contribution to improving the unity of Orthodox Christian peoples and consolidating and promoting Christian values in society.”

Justification for the the award was also attributed to Dodik’s leadership of Bosnian Serbs and its relationship to the “Serb Republic [as the only] legal option to ensure safety of the Serbs west of the Drina River, which divides them, or more accurately connects them to Motherland Serbia.”

Not surprisingly, but nonetheless bizarre, Emir Kustrurica, the Serbian film director who is originally from Sarajevo and had once been a secular Bosniak, was in attendance at the ceremony held in the Cathedral of Christ the Savior, along with a number of Russian diplomats and officials.  Kusturcia, who converted to the Serbian Orthodox faith in 2005, has made frequent trips to Moscow and attended the May 2012 Putin inauguration.

Emir Kusturica and Dodik in Moscow, March 2014. Dodik (right) received an award from the Russian Orthodox Patriarch Kirill “for his outstanding contribution to improving the unity of Orthodox Christian peoples and consolidating and promoting Christian values in society.”

While many dismiss Dodik as desperate to maintain power and should not to be considered seriously, he nonetheless has the attention of major political players in Moscow. So no surprise that he would issue a solicitous statement of congratulations to the people of Crimea, calling the referendum a “legitimate and democratic referendum in keeping with the Constitution, international law and the UN Charter on the Right of People to self-determination.” Russian ambassador to BiH Alexander Botsan-Kharchenko stood by his side as a proud and grateful witness.

None of Dodik’s activities with the Russians advances the interests of the state of Bosnia and Herzegovina to be improved, or to enhance responsiveness to the needs of its citizens. Dodik is using these meetings and relationships with Russians to affirm Bosnian Serb autonomy while invoking their “frail” position within BiH who must seek protection from their brethren in Moscow and Belgrade.

A more serious meeting between the Russians and the Serbs took place in April 2013 when Ivica Dacic, the prime minister of Serbia met with Putin to agree to become a “neutral” observer to Russia’s Collective Security Treaty Organization (CSTO), a post Cold War organization, viewed as a successor to the Warsaw Pact. Other members include Armenia, Belarus, Kazakhstan, Kyrgyzstan and Tajikistan. The agreement was hailed as a geopolitical advance in the Russian media and forecasted that when Serbia becomes a full-fledged member of the CSTO, the organization could speak on behalf of Serbia on Kosovo issues.

And while official Serbian soldiers have not been deployed to Crimea, at least for now, Serb Chetnik volunteers have shown up for duty in Crimea.  They were interviewed by Vice media journalist Simon Ostrosky, while working at a checkpoint located on a Crimean highway.

Ostrosky approached Bratislav Zivkovic   (second from the right, above) who hails from “central Serbia, where he said “Czar Lazar started his campaign for Kosovo” and was in Crimea to help the Russians because “we have been helpful to each other through the ages.” He added:  “We have come to help share our experiences from the barricades in Kosovo and Metohija.”  Enough said. Apparently Kosovo is Crimea now.  Just ask Vladimir Putin and Bratislav Zivkovic.

** Editor’s note: The Serbian Ministry of Foreign Affairs has not yet confirmed that it has a Twitter account, and the one named in the original article did not strike us as official, which is why we did not reproduce it here. However, Foreign Minister Ivan Mrkic has communicated the government’s neutrality on the Crimea issue, explaining that it would “not align with the East or West”. Other top officials have generally been reluctant to make any definitive statements about Crimea, citing the fact that Serbia is currently busy forming a new government.

This article originally appeared on Tanya Domi’s blog. She’s generously given us permission to republish it here. 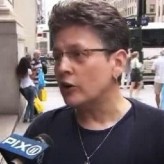