A global report has ranked several Balkan countries as among those most at risk from suffering the “loss and damage” of climate change: massive wildfires, rising sea levels, and extreme weather events. But developed countries, who are largely responsible for having created these conditions, don’t want to bear the costs. Meanwhile, Putin says a little climate change may be a good thing, since Russians wouldn’t have to buy so many fur coats. With so few willing to take responsibility, who will pay the price?

As this latest round of climate talks came to a close in late November, analysts focused on one emergent issue: the concept of “loss and damage”. The reluctance to deal with actual emissions commitments until Paris 2015 meant that the controversy around “loss and damage” became the main manifestation of the deep divisions between “developed” and “developing” nations.

Since 1995, the annual conference of the United Nations Framework Convention on Climate Change (UNFCCC) has aimed to address two major issues: how to reduce atmospheric  emissions such that temperature levels stabilize, and how to adapt to imminent effects from already rising temperatures. According to existing agreements, the cost of the work developing nations must undertake to “adjust to” and “mitigate” climate change — by preparing for increased disaster events, rising sea levels, changing precipitation patterns, etc. — will be the financial responsibility of the world’s biggest carbon emitters: developed nations.

The problem, developing countries argue, is that some effects of climate change, like increased extreme weather events, are no longer sufficiently addressed by “adaptation and mitigation” strategies provided in the UN Framework; the “loss and damage” is, in fact, already occurring.

In 2012, the Balkans experienced the meaning of “loss and damage” during the hottest summer in 40 years. Businessweek reported that the extensive drought in Serbia and Bosnia and Herzegovina destroyed many crops, resulting in more than $2.5 billion in total agricultural losses (in PPP). Dalibor Ballian, a forestry specialist in Sarajevo told Businessweek that the Bosna river had “turned into a drainage channel, and entire animal and plant populations have disappeared.” Drinking water was threatened in Macedonia, and the Bistrica river of Prizren in Kosovo was “reduced to a trickle.” The extreme heat produced a range of effects, from wildfires to a spike in food prices.

Speaking at a press conference in Warsaw, scientist Saleemul Huq of the International Institute for Environment and Development explained that participants in 2012’s Doha climate talks had agreed to discuss the establishment of a new “loss and damage mechanism” that would address “what happens when we fail to mitigate and fail to adapt sufficiently”. However, developed countries resisted calls for a new mechanism this year, pushing instead to file “loss and damage” under “adaptation” in existing frameworks.

The resistance eventually stalled the Warsaw talks, prompting a 4am walkout of the G77 group (which includes just one Balkan member, BiH) during negotiations. The G77 is a group of 77 developing countries.

“This is an issue that is very, very dear to the small island states and the least developed countries who are spearheading this, and they are being supported and being given a lot of solidarity by all the G77 countries,” Huq said.

“You see, if the developed countries have shown the leadership to reduce greenhouse gases at the onset of this convention, we, the most vulnerable would not have to adapt. We would not have the need to push for adaptation support. I now ask this question, is this convention still relevant to the times? Every time we attend this conference, I am beginning to feel that we are negotiating on who is to live and who is to die.”

For one, the division between the two categories — the “firewall” itself — has had its official relevance contested. As the Guardian reported, the Warsaw talks saw a group of “likeminded developing countries (LMDC)” push for a “restatement of the separation” between “developed” and “developing” that echoed those first established in the 1997 Kyoto Protocol. This would effectively ease their commitments in cutting emissions. Meanwhile, the US, the EU, along with other “developed” UN members claim that the “single agreement to curb emissions” signed in Copenhagen 2009 included both the developed and the developing, rendering the distinction no longer useful, as “combined emissions from developing countries are on track overtake those of the developed world by 2020” anyway.

The disagreements over how countries should be categorized is at the heart of the “loss and damage” controversy: somebody has to pay.

A leaked internal U.S. briefing document exposed the Americans’ anxiety about the increasing focus “on blame and liability”, with its anticipation that “poor nations will be seeking redress for climate damages from sea level rise, droughts, storms and other adverse impacts.” The document, originally reported in The Hindu, argues that “the longer countries look at issues like compensation and liability, the more they will realize this isn’t a productive avenue for the UNFCC to go down.”

Unfortunately, the United States’ honorable stand on “productivity” is obscured by the fact that it has the highest per capita emissions in the world, ranks second in total emissions, and is among the group of developed nations responsible for a large percentage of emissions accumulated so far. A legal mechanism for “loss and damage” compensation, it seems, would only be counterproductive for a specific few.

The rich do not want to pay, and the poor, likely to be the hardest hit by climate change, will certainly not be able to. While the Balkans straddle the line between developed and developing depending on the metrics one uses, their delegates at Warsaw acted in accordance with the larger Eastern Europe Group of the UN: a collection of countries known for their “cautious stand against proactive climate policy.” According to the Global Climate Risk Index released by policy think tank Germanwatch, Estonia, Latvia, Poland, the Czech Republic, Slovakia, Romania, Bulgaria and Greece have yet to adopt any adaptation strategies whatsoever, while Russia, Belarus and the Ukraine “have a proven track record in blocking climate policies of the international community.” Putin once famously joked that an increase in temperature could be good for Russians, as they could spend less on fur coats.

The report asks whether “the lack of climate policy — both in mitigation as well as in adaptation — in these countries is due to a lack of climate-change induced impacts (…) or a misjudgment of their own vulnerabilities?” Given that Serbia and Bosnia and Herzegovina ranked in the top ten of countries most affected by climate risk and loss of life in 2012 (Romania, Croatia and Kosovo all ranked in the top 26), it might be a good time to start reassessing those vulnerabilities.

According to the UNEP Climate Change in the West Balkans Report, Albania, Bosnia and Herzegovina, Macedonia and Montenegro have submitted adaptation plans to the UNFCCC  which are “outlines and generic statements of intent to adopt more detailed strategies related to specific challenges.” For Montenegro, such a plan includes the “eventual relocation of 10 percent to 20 percent of the urbanized coastal population.” The UNEP found that while there are “promising beginnings” in the development of institutions to build adaptive capacity, the key to success is cooperative management of water. Water resources in the region are highly exposed and sensitive to climate change, and “the fates of the agricultural and energy sectors are closely tied to the water sector.”

The regional vulnerabilities to climate change make the issue of ‘loss and damage’ all the more important for the Balkans. Businessweek reported that potato and corn farms were hit especially hard during the drought of 2012 due to dysfunctional irrigation systems that date back to the Yugoslav era. This is just one example of a potential adaptation strategy — improved infrastructure — that falls short of the reality the Balkans now face. EUFOR, the EU’s peacekeeping forces in Bosnia, were deployed to fight last summer’s extreme wildfires, and Serbia, Bosnia, and Kosovo still had to appeal for additional international help due the complexity and difficulty of the terrain, which is still seeded with landmines from the wars of the 1990s and vulnerable due to shortages in “aircraft capable of fighting the flames.”

Like many places experiencing the direct effects of climate change, it is unlikely the Balkans will be able to successfully respond to “loss and damage” events without international assistance. Unfortunately, the resolution of the “loss and damage” issue that emerged from Warsaw this year was rather insubstantial, a reluctant compromise between the entrenched positions of the rich and the poor. Negotiations hinged on the word “under”, since countries would be less likely to receive compensation if the mechanism were placed under already established frameworks.

“Loss and damage” was ultimately granted its own “mechanism” which, according to Der Spiegel, will not “exist under the adaptation framework in an institutional sense,” yet the term “under” was preserved in the text. The Bolivian representative told Der Spiegel “we are very disappointed with the draft text,” arguing that “this ought to be a financial summit.” Though vaguely worded and considered the “bare minimum that was acceptable” by some watchdog groups, the Warsaw Mechanism is seen as a starting point to build on over the coming years. There are important conceptual difficulties in attributing specific “weather” events to overall trends in “climate”; the problems with this causal connection arose recently in the coverage of Typhoon Haiyan. However, the extreme skepticism inherent to the scientific process means that it’s very rare to find 100 percent confidence in direct causal relationships. Correlative evidence, when it comes to complex, interconnected systems like weather and climate, is more than sufficient for action. It’s impossible to avoid the fact that the historical advancement of developed countries through their industrialization processes, now manifested as accumulated carbon, renders them more responsible than others in the predicament we now find ourselves.

And what is this current predicament? Are we living in the anthropocene, a new epoch in Earth’s history wherein the human species act as a geologic force? French anthropologist and sociologist of science Bruno Latour argues that out of the climate change struggle a whole new meaning of “geopolitics” is emerging. In a recent talk given at the University of British Columbia, he claimed that new geo-political attitudes, are “not about human politics overlaid on the Earth’s static frame, but politics concerning contradictory portions, visions, aspects of the Earth and its contending humans.” To conceive of human action as separate from geology, or to distinguish between the “natural” and the “social”, is “just as impossible as deciding which side you are on as when you follow the path of a Mobius strip with your finger.”

Certainly those with the least capacity to protect themselves, those pushing for a robust “loss and damage” mechanism, will be feeling the effects of these geo-political attitudes and how we conceive of ourselves and our actions on Earth. After losing all his crops in devastating droughts in 2012, Serbian farmer Ljubisav Tomic told Businessweek, “Only God can help us, only heaven can save us.” Here’s to hoping that’s not true. 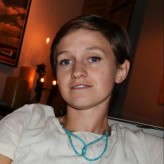 Grace Phillips is a graduate of the University of North Carolina at Chapel Hill where she received degrees in Philosophy and Geography. She will be doing an MA in Research Architecture at Goldsmiths this fall.