Meet the youth of the Balkans, version 2014. Born in post-Yugoslav era, they’re old enough to remember years everyone wants to forget, yet too young to have memories of the times everyone wants to remember. Facing challenges unlike their peers anywhere else in Europe, they’re a generation shaped by massive social instabilities, limited employment opportunities, and debt they had no part in creating. Yet even for a generation whose destiny seems predefined by a dark history, the spirit of youth remains synonymous with hopes, dreams and the desire for change. Post-conflict zone or not, it is in DNA of these young people to never simply settle with the game plan of past generations.

In this series, I will set out to answer a question that can only be answered by meeting the youth of the former Yugoslavia: Who is the Balkan Class of 2014?

Meet Zvonimir, a Euro-optimist with a heart beating for the Balkans

The Class of 2014 has many identities. Last year marked a new chapter in Balkan history when Croatia became the second former Yugoslav republic to join the European Union. This development has allowed young Croats to have a foot in two different camps.

After nearly ten years as a candidate country, Croatia became the 28th member state of the European Union on July 1st 2013. The accession referendum passed with 66 percent of voters in favour. Croatia’s joining the EU seemed to mark the final brush-off from the old Yugoslav times, and another way for the country to distance itself from Serbia, which remains stuck in the purgatory of “negotiation talks”.

Moreover, the accession of Republika Hrvatska has officially invited the population of Croatia into the big melting pot of European culture and Brussels-approved “European identity”. Since some segments of the youth population of Croatia feel they never got to fully exercise their Yugoslav identity, this raises the question of whether the new unity with the EU has brought any meaningful changes to the self-image of young people in Croatia.

With the aim of finding out whether or not the Croatian Class of 2014 has taken this so-called European identity to heart, I met with Zvonimir Canjuga, a 22-year old business student in Zagreb. It was the weekend of the European Parliamentary elections but other than a few lonely election posters scattered randomly throughout the city, Zagreb seemed unaffected, and perhaps even unaware of the coming event.

Zvonimir, on the other hand, knew all about it. As the president of the Zagreb branch of Association des États Généraux des Étudiants de l’Europe (AEGEE), also known as the European Students’ Forum, Zvonimir is a prime example of a young person from Croatia who has accepted the challenge of double-dutching between “the Balkans” and “Europe”.

AEGEE was established in 1985 and is the largest trans-national student organisation in Europe, with 13,000 members from both inside and outside the Union, including Turkey, Russia and the Caucasus region. In addition to arranging cross-national exchanges and activities for its members, it actively promotes “European values” and opts for a Europe without borders.

As we sit at a café close to his apartment building on the outskirts of Zagreb, I ask him if he thinks his generation of young people in Croatia consider themselves European.

“Since 1992, we have wanted to consider ourselves Europeans, and last year, it finally happened,” he explains.

“But it is just on paper. In our way of living, we are still much more connected to the Balkans than to Europe,” he says, evidencing that “Europe” is still viewed in opposition to the former Yugoslav countries.

Zvonimir, on the other hand, has considered himself European long before the country’s entry into the EU was celebrated by tens of thousands of Croats on Ban Jelačić Square in Zagreb last summer. As a part of AEGEE since 2011, he explains how the European Students’ Forum has allowed him to meet with like-minded young people from across the continent, allowing his outlook on the world to stretch beyond the borders of the Balkan Peninsula.

Though he does consider his peers from the Croatian Class of 2014 to be internationally minded, he knows his strong Euro-identity is not necessarily representative of his entire generation, especially with respect to his involvement in the election. He explains how getting people involved and interested in both the election and the EU as a whole continues to be an uphill battle. In April 2013, when EU Parliamentary elections were first held in Croatia, only 20.8 percent of voters cast a ballot.

As part of the preparation for the election, Zvonimir and AEGEE Zagreb organized a small campaign to encourage voting. This included a small debate about European culture and identity at the Open Media Society in Zagreb. Less than twenty people showed up.

Zvonimir, however, remains hopeful. He knows that it will take time for people to fully adapt to membership in the “European Club”.

“It is a slow process,” he adds. “I hope that in five years, for the next election, more people will vote and see themselves as a part of the Union”.

During our conversation, Zvonimir talks about three separate identities, which he uses to define both himself and his generation: The Croatian, the Balkan and the European — though he admits he has a hard time defining the latter.

“Everyone is talking about this ‘European identity’, but no one really knows what it is,” he says, suggesting that it may remain an intangible buzz term.

Zvonimir’s uncertainty about how to define “European identity” may derive from the fact that the term sometimes seem to be the Frankenstein-version of identities: An artificial term created by mad scientists/European bureaucrats in the dungeon of Brussels, far away from the reality of European citizens.

Though Zvonimir uses both the Balkan and European labels to identify himself, in some ways, the two terms almost seem to be polar opposites of each other.

While the European identity at times can seem like a fake common identity that has been artificially created to unite all corners of Europe, the Balkan identity seems to represent a common culture that was forcefully torn apart from above. As Europe appears to be mostly united by politics, the Balkans seems to be divided by it.

Common European identity may be a product of political spin, but so-called “European values” have proven an effective means for some members of the Balkan Class of 2014 to build bridges over the wounds that remain from the past.

“The partnership between AEGEE Beograd and AEGEE Zagreb is really good,” Zvonimir says.

In fact, the two groups are even organizing a series of activities together, including a Summer University where 20-50 AEGEE members from both EU and non-EU countries participate in workshops and other projects. Officially, these summer universities are arranged with the aim to “explore the multicultural dimension of the European continent, remove national borders, fight for tolerance and create open-minded citizens”.

“But, of course,“ Zvonimir adds, “having fun is a major part of it.”

Nevertheless, the activities organized by the European Students’ Forum promote a level of “Euro-integration” that could hardly have been done better by the suits of Brussels.

“Balkan Funk Vol. 2” is a four-week seminar that will take place in both Zagreb and Belgrade. The event revolves around both Serbian and Croatian culture, with the aim of breaking down some of the stereotypes surrounding the Balkan area. Zvonimir admits that the history between Croatia and Serbia is still a sensitive topic, but in the AEGEE community, the process of healing is well underway.

“A lot of us think in the same direction,” he explains, adding that the organization’s Serbian members have just as strong of a “European identity” as their peers from Zagreb. To Zvonimir, EU membership has simply brought a different set of opportunities to Croatian youth. That’s about all the difference he sees between the Croatian and the Serbian class of 2014.

Two months after the European Parliamentary election, I speak to Zvonimir once again.

As it turned out, he did not have to wait five years to see more people in Croatia feel “European”. While voter turnout in most other EU countries plummeted on a roller coaster ride straight down, voter participation in Croatia rose to 25 percent. Zvonimir himself is currently making his way to Belgrade to attend the AEGEE Summer University. I ask him, on a scale from 1 to 10, how “European” it feels to leave the Union and enter the solely “Balkan” area of Serbia. He rates it as a steady 7.5, as he is looking forward to spending time with other young people from both sides of the EU border, given that his European identity is first and foremost based on the unity of people, and not of countries.

Previously: The Balkan Class of 2014: Mima 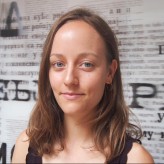 Originally from Copenhagen, Katrine Bundgaard recently lived in Belgrade for nine months and was a volunteer at Centar E8 as a part of the European Voluntary Service program. She's 21 years old.