Macedonia finally looks like it will hold long-delayed elections on December 11th. After two years of protest, Ivana Jordanovska predicts a victory for the opposition.

Two years ago, Macedonia stood in awe as students of the state universities organized the biggest student protest in the history of the country’s independence. With the opposition’s boycott of the work of the Parliament, the ruling coalition unanimously voted in a law seriously breaching the autonomy of state universities. But who could’ve guessed that the reaction would be as strong, as loud and above all else, as persistent?

Just as the Government released some of the pressure from the students’ discontent in early 2015, the main opposition party came out with what became known as “the bombs”: a series of illegally-recorded conversations of politicians and high-ranking government officials. Many of our suspicions about wrongdoing on the part of the government were proven, making the illegal tapping of over 20,000 citizens only a fraction of our problem. And by “our”, I refer to the judgement of every sane citizen.

The governing parties, led by VMRO DPMNE, struggled and shifted strategies quite a lot in the past year and a half. Attempts at spinning the narrative, mobilizing the countless public servants employed since they came to power as a form of a “counter-protest”, and paying high-priced lobbyists in Washington D.C., just to name a few.

Citizens, political parties, and the international community waged a tug-of-war in an attempt to realize their preferred scenarios, which were at odds most of the time. After two postponed dates, it seems that we will finally have elections on December 11th.

For the united opposition, it was important that some basic criteria for electoral decency be met, which took time. A year and a half ago, when the first political agreement was reached, the governing parties tried to rush to elections. They calculated that the more time the opposition had to unite as a common front, shine enough light on the government’s wrongdoings, and dismantle their scheme of electoral fraud, the less chance they would have of winning.

Citizens and the main opposition party SDSM pushed for the election at the end of this year. With every postponement, the opposition gained a more level playing field from newly-implemented electoral reforms, but lost momentum from the protests of this year and last year. Additionally, if the vote is not held on December 11th, the next reasonable date is Spring 2017, a period during which we are scheduled to hold the regular local elections. If the early parliamentary and regular local elections are to be held together, the opposition will definitely lose out. The local elections will shift the narrative to that of local topics and issues, taking attention away from the grave wrongdoings on the national level and other burning issues such as poverty, healthcare, and education.

As we enter the election period, the balancing act goes on. The ministers for internal affairs and labor and welfare, as well as the deputy ministers for public administration, agriculture and finance, who come from the opposition, function as the missing oversight mechanism. Their task is to make sure the areas where pre-electoral manipulation usually takes place are constantly monitored, thus ensuring separation of party and state functions in a system where the two have become indistinguishable.

The State Electoral Commission continues to work on providing a realistic list of voters, cleared of any of the “ghost” voters from elections past. The illegally recorded conversations first offered proof of the “ghost voters” — thousands of voters registered under fake names, up to 70 in a 40 sqm apartment, ready to deliver victory after victory for the ruling party. The Commission has until November 16th to finish this process, when the lists will be finalized.

A record number of previously passive voters are expected to come out and vote in these elections. The biggest protest vote against the coalition between VMRO DPMNE and DUI is expected to come from young people aged 18 to 29. The same people who offered the first serious civic opposition will be the people who, two years later, are expected to vote the governing coalition out of office. This phenomenon is even more significant in the long run. If we have a generation ready to demand transparency and accountability through protests, public involvement in the decision-making process and elections, we have little to worry about when it comes to the state of our democracy.

The mobilization of citizens, together with the dismantling of the state apparatus serving the governing parties and the removal of “ghost voters” should bring victory for the opposition. For SDSM and the leaders of the protests, these elections are a “referendum”: a reminder of the referendum for independence held 25 years ago, and a popular demand for democracy today. For the governing party officials under investigation, it’s a referendum on their freedom. If they win the elections, they will engage all instruments to stop the judicial proceedings against them.

One thing is certain: We are at a crossroad as a society. If the pro-democracy forces lose, and VMRO DPMNE along with DUI form a government again, we are looking at a very dark and sordid period ahead. Many of the principal fighters among the opposition will lose their will, and some will probably leave the country for fear of repercussions. Some will be endowed with the well-known Balkan strain of stubbornness – “inat” and will continue to fight, but it will be a while before a stronger united front assembles again.

However, if my analysis is correct and the opposition wins, we are looking at a long period of reconstruction and laborious building of institutions towards a better, more stable shape and level of integrity. It will take every atom of energy and the engagement of every capable individual in a continuous daily struggle before we get back on track.

The 11th of December is our chance to prove that nonviolent opposition to authoritarian rule can be successful, and that the wisdom of 1991 was not just a fleeting moment. In the 21st century, even in the tumultuous Balkans, one does not need gunpowder to remember the plot. 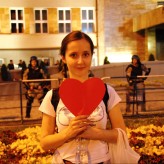