At the exhibition’s core there stands a monument lamenting the 1914 assassination of Archduke Franz Ferdinand and his wife Sophie, arguably Sarajevo’s most famous historical event. The monument was completed in 1917 by Eugen Bory, and stood on the site of the assassination for less than a year before being removed by a new government eager to stress its independence from Vienna. After sitting in storage for close to a century, it has recently been renovated. It is mildly interesting.

Much better is the video installation accompanying it, Gavrilo’s Principle, by Alia Krulisova and Jana Markovska (see video below). When approaching the aforementioned monument, the visitor walks past screens showing onlookers in period dress. You, walking between these screens, are the Archduke, a transformation at once flattering and unwanted, given your anticipated fate. And so a strange paradox arises – the assassination is happening, but you cannot see it. You are barred from being a witness to the event, because you are the event. Inevitably, once the shock of this dislocation passes, thoughts of lunch, unanswered correspondence, and last weekend leap to mind, as they must have done to the Archduke. The installation reduces a reified historical moment to a real day, a real rainy afternoon.

All this is good, but in some ways predictable. Predictable because this is the latest in a long, long line of exhibitions concerned with history in Bosnia-Herzegovina. These shows range from sedate presentations of Sarajevo’s Ottoman/Austro-Hungarian heritage (as in the recent Sarajevo Artist’s Colony) to theoretical meditations on the nature of history itself (as in Dimitrijević’s Future Post History). They are persistent and legion. Why?

Well, perhaps it is the War. Perhaps average Bosnians (of whom there are none) have an elevated sense of history, because from 1992 until 1996 they lived inside a historical event. Though this is a common view, I think it is incorrect, because my sense is that the Bosnian war was not experienced as “historic” as it was happening. In saying this, I do not mean to deny the suffering of the Bosnian people, but rather to point out that history is always more personal than political. A war, really, is only historical in the sense that it made the news – it fits into a category of school-book history that includes dates, kings, revolutions, and Empires. It is no more historical, on an everyday level, than a birthday or a first date or a bereavement. And this is why the best art about the war – such as Nela Hasanbegović’s Story About Fish or Adela Jušić’s When I Die, You Can Do What You Want – focuses on seemingly inconsequential, everyday events, rather than grand narratives.

So let’s try something else. Perhaps this concern with history has more synthetic origins. There is good reason to think so. One of the very first organizations on the scene in post-war Bosnia was George Soros’s Open Society Foundation, who had previously opened Soros Centers for Contemporary Art (SCCAs) in a swathe of ex-Eastern Bloc countries since 1989. The countries of the former Yugoslavia received its share of these centers, with the Sarajevo Centre for Contemporary Art opening in 1996.

They possessed a well-defined ideology. Soros’s tutor at the LSE had been Karl Popper, who in The Open Society and its Enemies (1951) had argued against the deterministic view of history put forward by Marx and others. In the Eastern Bloc and, to a lesser extent, Yugoslavia, governments had used art to present just such a view, through a strict enforcement of Socialist Realism. In Popper and Soros’s view, the false historical certainty afforded by this paradigm should be replaced with the open debate and continual questioning of a lively public sphere. Since art had contributed to communist ideology, presumably it could also be used to undermine it.

Accordingly, the SCCAs set about funding artists to produce counter-narratives, to reclaim the real history of their societies. In time, the dominance of SCCAs in small, fragile contemporary art scenes attracted criticism. Many accused the Open Society Foundation of a peculiar form of colonialism, riding roughshod over local artistic traditions in order to bring a globalized “contemporary art” to the poor old Balkans. As Miško Šuvaković put it in 2002, “what characteristically occurred soon after the creation of the Centres was the appearance of similar new art in entirely different, sometimes even incomparable, cultures”.

Such was the similarity of all this new art that Šuvaković suggested it constituted a whole new genre – Socialist Realism had now made way for “Soros Realism”. This new movement, in Šuvaković’s words, created a “formula for ‘the genesis’ of a work that has a go and that receives theoretical and financial support”. That is, work that was recognizably “contemporary” in its use of then-new media, and received funding because it broke taboos, revealed oppression and uncovered long-hidden truths.

Since 2003, the term has become outdated – the Open Society Foundation have stopped funding SCCAs. However, the genre continues under the sponsorship of other organizations. An already unwieldy term is made absurd once one posits a Swiss Cultural Fund Realism, a European Cultural Foundation Realism, a Sarajevo Open Centre Realism, but whatever it is now called, the art funded by these organizations retains its concern with history.

I think this is the explanation we seek. In Bosnia, such was the dominance of this paradigm immediately after 1996 that it appears to have – inadvertently or otherwise – given rise to a new artistic tradition. It is notable that even art untouched by political sponsors still concerns itself with alternate histories, counter-narratives, and meditations on the nature of the past. Historical inevitability, grand narratives, and materialism are shunned, replaced with a view of history which celebrates inconsequential events, recounts forgotten stories, and is skeptical of causation.

I do not mean to criticize this tradition. It has given rise to some excellent art. Next to the historical museum of Bosnia stands a monument by Braco Dimitrijević, which is one of my favorite pieces of public art anywhere in the world. It consists of a white cube, on which is written “under this stone there is a monument to the victims of the war and Cold War”. The piece may be facetious, childlike. But I also think it is the apotheosis of Soros Realism. The central event, the grand narrative, is missing. Instead we are left with a mute block of concrete, open to infinite interpretation, a statement (or a reminder) that history is not monolithic, but open to question, and that in this art plays a critical role. Long may it continue to do so.

This article was originally published on Matt Webber’s website. He has given us generous permission to republish it here. 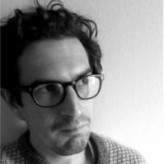 Matthew Webber is a research student, novice journalist and occasional artist currently based in Sarajevo. His PhD research focuses on the relationship between contemporary art and politics in Bosnia-Herzegovina, and is being conducted at the UCL Institute of Archaeology.