The youngest minister in Swedish history, Aida Hadzialic, has spoken eloquently on hard work, hope, and being inspired by watching her Bosnian parents start again from scratch.

A pale blue surrounds the cautiously grinning woman. Wearing a beige top, a young dark haired woman is crossing her arms. This is the cover of a November issue of Dagens Industri, one of the most widely read newspapers in Sweden.

The woman on the cover is Aida Hadzialic, a 27 year old politician from Sweden’s Social Democratic Party. At the age of 23, Aida already occupied a high office in local politics: she worked as “kommunråd” — a councillors with executive responsibilities — in Halmstad, the Swedish town she grew up in. “At an early age, Aida was considerably determined,” said local politician Ingegerd Sahlström, who knew Hadzialic as youth politician. Hadzialic reached the 10th place in  the 2013 selection of 101 ‘super talented Swedes’ in the Swedish business journal Veckans Affärer. One year later, she became Sweden’s Minister of Education.  Her objective: making sure that Sweden has the best schools in the world. According to Swedish radio broadcaster “Sveriges Radio”, Hadzialic is the youngest minister in the country’s history.

Aida Hadzialic was born in 1987 in Foča, today’s Bosnia and Herzegovina and former republic of the now defunct Yugoslavia. A few days before the war erupted in Bosnia and Herzegovina in 1992, she was crossing a bridge with her uncle. A man approached the two and asked whether they had heard about the outbreak of war in Croatia. “This could never happen here,” answered her uncle. “But shortly afterwards the war came to Bosnia and Herzegovina and we were obliged to flee,” Hadzialic recalled in an interview with Swedish newspaper Hallandsposten in March 2014. She was five years old at the time. The Hadzialics’ flight ended in Sweden, where they found their new hometown in Halmstad.

From this experience as a refugee, Hadzialic has managed to turn her suffering and the losses she experienced due to the Bosnian War into a source of inner strength and creative energy. Her career illustrates the sentence by Jewish philosopher Vilém Flusser in his essay Exil und Kreativität (Exile and Creativity) that “history is not written by the expellers, but by the expelled.”  When an interviewer wanted to know where Aida Hadzialic gets her drive from, her answer was linked to her fate as an expelled person, an existential experience: “My parents. They lost everything and started from scratch.”

“Determined, well-informed and also too fussy, sometimes,” are the three adjectives Hadzialic used to characterize herself. That sounds quite ordinary for an ambitious person. And somehow Hadzialic is ordinary. She did what so many students with a migratory background do in the rich countries of Europe: they study in a city not too far from their parents’ house. The Hadzialics’ Swedish hometown is Halmstad; Aida studied law in Lund. A train, which brings you in 1 hour and 35 minutes from one place to the other, links the cities, and the law student spent a lot of time taking that train.

A major reason she had for enrolling at Lund University was her political career in Halmstad, despite the fact that Hadzialic finished her International Baccalaureate (IB) as a valedictorian, attaining 41 points in her IB (prestigious universities like Oxford or Cambridge require 39 points for admission).

When asked about her most adventurous life experience, Aida replied: “I chose to engage myself politically, and didn’t realize at that time that it would influence my life that much.” As if her life were to be free of even the lightest peccadillos. Later, she addressed the issue of how her flight from Foča affected her, explaining that it made her a social democrat. As if the first thing coming to your mind when thinking about a main intersection point of your life is the political implication this crucial event had.

In the meantime, Hadzialic’s own decisions about her professional life now have far-reaching consequences. They will especially affect Sweden’s youth. At the age of 27, she achieved a political vertical take-off. So far, she has been careful not to reveal delicate information about herself, or her weak points. Maybe it is because of her existential experience — the flight and the start from scratch in a new country — which has taught her to opt for stability and to dodge uncertainty. If so, that pale blue, that cautious grin and that arm-crossing on the cover of Dagens Industri are what symbolize Aida Hadzialic’s clean-sheet career best. 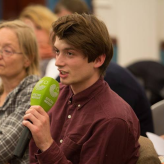