We are republishing the few pieces we lost in the recent ownership transfer of our site.

In late January, we received the following letter from a young medical student in Skopje named Marta Kamcheva. It’s been lightly edited for house style.

I love all the info your site provides and I’d really be thrilled if this letter even gets your attention. I’m a student from Macedonia and I couldn’t find any other web-mag where I can freely talk about my opinion like I can here. I have written a letter that’s called ‘Why I decided to leave my (developing) country’, and I’m sending it here. I hope if it interests you, this letter will get a spot on your site. It’s written in English. I’m sorry for the disturbance.

I saw a scholarship call a few weeks ago. One of the most profitable companies in my country was giving out money grants to successful students who are in need of financial aid. I don’t usually apply for scholarships in my country because it’s useless if you don’t have the right connections to get it, but this one sounded tempting. I thought ‘Okay, maybe this time connections and political activity in the ruling party won’t make an impact on who gets the scholarship.’ So I applied. And I didn’t get it. The money ‘for motivating excellent students who are in need of financial aid’ was given to students whose parents are doctors and architects. You could assume they are really in need of financial support.

As I saw the results and read the names of the lucky ones, I didn’t feel stupid or sorry. I felt like it was the final warning.

It’s a strange thing being born and raised in a country that doesn’t care for you as a citizen. With time, the natural effect is that eventually you start not caring about your country either. I’m past that point. Now I want to leave this supermassive black hole that swallows young, free-thinking, gifted individuals and stuffs them under a carpet, never letting them speak out or succeed, just because they don’t agree with everything the ruling party says. It’s very much like what George Orwell described in 1984. I used to joke about that and say ‘Ask the politicians of the ruling party what their favorite book is and they’ll yell 1984. It’s like a how-to manual for them’. But it doesn’t seem like a joke anymore. It’s the cruel reality.

I live in a country that doesn’t have the much-needed statistics about the number of its residents. A country where you have to bribe the nurse to get faster and better health care. A country where you need to be a member of the ruling party to get a job. A country in which students pass exams by cheating every day. Everyone knows; no one cares.

For the people in my country, living in this status quo of the sheer devastation of human rights is just the way it is and they don’t feel like something should change. Actually, they don’t want to change.
For them, getting a degree by cheating and getting a job through active membership in the ruling party is the easy way to win at life. Education is at the lowest level, while self-confidence at the highest. Criticism is viewed as jealousy of someone’s success, not as a way to improve. Silencing the free-thinkers is number one in people’s ‘how to succeed for dummies’ book.

I’m not saying everyone is like that. There really are talented, intelligent and capable individuals with whom I share my origins. The thing is, they don’t live in my country anymore. Remember the natural effect of not caring? Any kind of microscopic patriotism is lost when things like those mentioned above happen to you. So you put all your efforts in finding a way to leave.

I see my parents’ eyes when I talk about leaving and it makes me utterly sad. I hear the disappointment in my dad’s voice when he says ‘I spent my life in this hole, leave and get the life you deserve.’ I feel the pain in my mom’s heart when she tries to find a way to keep me here but knows there isn’t one.

The worst thing is, there’s no one to blame. I wish there was a person who was responsible for this, individually, so we could get rid of him and start over. My fellow free-thinking citizens say that’s our PM. I don’t agree. It’s us, this nation. Our way of thinking is so messed up that we agree and keep silent about things that anywhere else in the world would be seen as a crime. It’s simple. There’s a saying that goes ‘I’d rather be number one in my village than lose the race in a big city.’

It’s pretty funny. In the English language the words ‘live’ and ‘leave’ are so similar, they even sound the same. My only way to live is to leave this country. I’m leaving and I’m taking everyone I love with me. We deserve better. So long, Macedonia. I hope I come back as a tourist one day and see you in better shape. I love you, but we’re breaking up. It’s not me. It’s you. 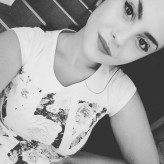 Marta Kamcheva is a 22-year-old student of medicine at the Ss. Cyril and Methodius University in Skopje. She also enjoys writing and believes change is always for the better, and it won't happen without people who speak up for themselves.