As details trickle out about the costs of the tragic floods affecting Serbia, the costs to the energy sector are estimated at 100 million euros at Kolubara alone. This highlights the fact that such a centralized lignite-dependent system, as well as its human and environmental costs, is far from resilient in the face of serious weather events, which will soon become the norm.

Serbia, Bosnia and Herzegovina and Croatia have barely started to recover from the shock of the recent floods, which claimed at least 51 lives in Serbia alone and led to the evacuation of nearly 30,000 people from flooded towns and villages. Some of the worst hit areas in Serbia are home to the coalmines and thermal power plants on which the country’s electricity generation largely depends.

The Kolubara mines in western Serbia are the largest in the country, producing 70 percent of the lignite consumed here and feeding thermal power plants that generate more than half of the country’s electricity. They have now been turned into polluted lakes.

During the days of the flood, a valiant fight was put up to save the Kostolac thermal power plant, east of Belgrade, from the waters. Hundreds of soldiers and residents worked together to raise sandbag barriers around the perimeter of the plant. The plant supplies a fifth of the country’s electricity needs. Although the operation was successful this time, it was a very close shave.

Despite efforts by the people and authorities, the country’s coal production is currently halved, and flooding cut Serbian power generation by almost 40 percent during the floods, forcing the cash-strapped country to import electricity. Prime Minister Aleksandar Vucic said Serbia needed to set aside between half a million and one million euros per day to pay for the emergency imports while the Nikola Tesla coal plant was out of commission.

According to the first estimates, it will take another year for the Kolubara mines to resume normal operations – and that means enormous costs for the country.

In the meantime, the long-suffering residents of the village of Vreoci – situated on a narrow corridor of land between two mines – whose residents have suffered from water, air and noise pollution, as well as vibrations from heavy machinery for decades, are now facing a new blow. Life was already so unbearable before the flood that residents had been pressing the EPS Kolubara mining company to resettle the whole community, as was promised in a 2007 Serbian government plan. But it hasn’t happened yet. When the floods hit and the riverbank broke, it took with it a heap of waste from the coal processing plant and spread black mud around the village. Residents are now concerned,  as they don’t know the contents of the dust that is left, and are calling on the government to carry out testing. And just to make matters worse, with two pits out of action, work in Field D near Vreoci has accelerated, giving new impetus to calls for resettlement.

The energy crisis that looms large in the background of the humanitarian emergency that Serbian society must address today has its roots in the faulty structuring of the energy system. Like most other Balkan countries, Serbia relies on electricity produced by coal power plants built before 1990 that burn lignite from local mines. This means a highly centralized energy sector over-reliant on a single type of fuel. But in their energy strategies, Serbia and other Balkan countries largely plan for more of the same, adding new lignite units to the affected plants – at Kolubara, Nikola Tesla, and Kostolac.

Yet these floods and the crisis they have produced in the Serbian electricity generation sector — at least 100,000 people were left without power and the authorities find themselves dependent on expensive imports – might constitute a wake up call for the current government.

When it comes to the energy sector, these tragic floods prove one thing beyond all doubt: that it is foolish to place all eggs in one basket.

Extreme weather events are only going to become more regular due to climate change – this knowledge we have today beyond any reasonable doubt thanks to the Intergovernmental Panel on Climate Change. Energy systems like Serbia’s, which are over–reliant on coal and highly centralized, are not only causing more climate change, they are also extremely vulnerable to its impacts.

Many of these coal units, including the newest Kostolac B3 unit being planned right now, are being developed without sufficient assessment of their environmental impacts. Flood risks at energy production units are rarely studied properly despite reckless river management across Central and Eastern Europe, which makes riparian regions vulnerable.

Once Serbia exits disaster containment mode, its authorities have a duty to reassess their approach to energy. Sticking to coal is irresponsible. A diversification of the energy sector is needed as part of a shift away from fossil fuels to renewables like sustainably sourced biomass and carefully situated wind turbines. It is estimated that biomass alone could meet at least a fifth of Serbia’s energy needs over the coming years if the proper investments were made. Most urgently, energy losses must be reduced and demand kept under control.

In the Balkans, we sometimes have a feeling it is fine to cut corners. But all of us, starting with our governments, must understand that there is no way we can cut corners with nature. This is one of the serious lessons of these terrible floods. 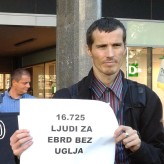 Zvezdan works with CEKOR, the Center for Ecology and Sustainable Development, an organization based in Subotica, Serbia.