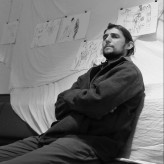 Arturo Desimone is a writer and visual artist currently based between Buenos Aires Argentina and the Netherlands. He was born and raised on the island Aruba, to parents of origins from Argentina, Poland and Siberia. At the age of 22 he emigrated to the Netherlands, but after seven years decidedly began to lead a more nomadic life. Prior publications of his poetry, short fiction and non-fiction appeared in journals such as The Missing Slate, New Orleans Review, Open Democracy, Little Raven, Small Axe salon, and Knot lit. As a translator, he has worked with Argentinian and Caribbean poets as well the Azerbaijani poet Imanova Günel.

Arturo Desimone recently wrote an article titled “On Orientalism”, inspired by a debate in Azerbaijan…