A few hundred miles away from the Battle for Mosul in Iraq — the most massive military operation in the world — a lesser known conflict between Kurds and the Turkish armed forces continues in North Kurdistan. Đorđe Bojović reports from Diyarbakir.

In the evening, the arrivals hall at the Diyarbakir airport appears ghostly. The airport building is too large for its needs and reminiscent of many other grandiose projects that eventually collapsed as they grew economically unsustainable. As I walk out of passport control, two policemen stop me. The policeman in a flak jacket holding an AK-47 steps in to ask, “What’s the purpose of your visit?” The right answer – to document mass atrocities that have occurred in the Diyarbakir region – would not be an advisable one to give at the moment. Hence, my visit begins by giving contorted and vague answers to the Turkish border police.

The newly constructed three-lane road leads to the center of Diyarbakir. The city lies on the right bank of river Tigris, and with its 930,000 inhabitants serves as the informal Kurdish capital of southeast Turkey. Situated in the heart of the Middle East, Diyarbakir possesses an extraordinary mixture of cultural heritage and a vivid milieu which includes preserved traces from ancient Mesopotamia, the medieval Silk Road, the Ottoman period through to today.

The Kurds have inhabited this region since ancient times, and have from time to time formed their own state. The Franco-British Sykes-Picot Agreement from 1916 drew the contemporary boundaries and spheres of influence in the Middle East. The agreement hadn’t foreseen the existence of the Kurdish state (Kurdistan), and divided it into four states – Turkey (Northern Kurdistan), Syria (Rojava or Western Kurdistan), Iraq (Southern Kurdistan) and Iran (Eastern Kurdistan). The growing instability of the entire Middle East region lies, in large part, with the unresolved Kurdish national question.

In Turkey, the fight for Kurdistan was massively propelled by the foundation of the PKK (Kurdish Workers’ Party) in 1986, the organization that aims to unify the Kurds in an independent state. The ensuing three decades were full of constant tensions and failed attempts to reach an agreement, until the moment peace process between the AKP (Erdogan’s party) and the Kurds was finally halted in 2015, after Kurds briefly entered the national parliament. Since then, the attacks in the city and in the countryside – on PKK fighters, police stations, and army patrols – have become part of the daily routine.

Also known as Amed, the city is home to the outstanding, black-stoned district of Sur, which has become the center of the fighting that takes place between the PKK and the Turkish government’s soldiers and policemen. Sur’s history stretches back millennia. Jews, Muslims and Christians, Persians, Arabs, Armenians and Turks have all made their mark here. The district has become known for curfews and clashes that have caused irreversible damage to cultural and social life. During a total of 279 days of curfews, Sur was a misty and bloody area with no conditions for normal life. More than 30,000 residents have fled Sur, a World Heritage Site protected by UNESCO.

I asked a few people in Sur what was going there, since the district has been utterly devastated under the siege of Turkish armed forces. Leila, my guide through the labyrinth of small streets with traditional manufacturers and baklava shops, was one of 4,920 suspended teachers from Diyarbakir. She told me that the destruction of Kurdish sites is part of a deliberate effort to erase traces of Kurdish life and to rebuild new sites in the neo-Ottoman style. Her family left Sur last year after their property was illegally expropriated. As we walked on the main street, she recalled with some nostalgia the now-absent faces, shops, children’s games, and scents…

The Sur community, surprisingly, tends to uphold a relatively normal way of life in besieged district. Piles of fresh grenadines and watermelon — the symbol of Diyarbakir — shelled walnuts, overripe figs and green olives lie along the main street just next to an Otokar Cobra mobility vehicle. Many passages are walled up by concrete blocks reminiscent of Cold War Berlin. In the few inns that remain open, the elders murmured on about curfews. Taking çaj (tea) from the traditional cup, I joined the group playing cards. A story about the dozens of people burned alive in a basement in Diyarbakir is something you cannot easily comprehend. The police even didn’t allow the victims’ families to bury their loved ones’ burned corpses for over a month.

Denial of access to health, education and social services has become commonplace in the life of Turkish Kurds. Local residents, caught in the crossfire, bear the brunt of the violence. According to research conducted by the pro-Kurdish Democratic Peoples’ party (HDP), an estimated 290 people have been killed in areas across southeast Turkey since the first curfews were announced in August, 25 of whom died in the district of Sur. Despite the large number of civilians killed, there has been no investigation into any of these deaths. “It’s hell here,” were the only words my new teammates could muster from a local tavern.

Back on the main street, I’m led to the Mardin gate, on which the donjon tower is fluttering a huge Turkish flag. An abandoned nightclub called the Hangover, just next to the tower, has been adapted to serve as a police checkpoint that guards the southern entrance to Sur. A policeman in civil uniform stops me at the entrance and says “You need a permission to enter.” Apparently that was the only phrase he could say in English. Bullet holes on buildings appear to admonish all of the destructions and fusillades that befell this place so recently.

Passing through the gate, the splendid view of fertile fields near the Tigris River takes your breath away. A young barefoot boy, not more than seven or eight years old, pushes carts filled with fresh vegetables and parsley to sell on the main street. Just 100 km downstream, at this very moment, the most massive military operation in the world — the battle for Mosul in Iraq — is being carried out. Interestingly, Peshmergas, the Kurdish warriors from Iraq, are first on the frontline of the international coalition to defeat ISIS. They practically form the outline the boundaries of Southern Kurdistan. Meanwhile, the Northern part prepares itself for the next series of curfews. While the entire international media’s attention is on nearby Mosul, the Diyarbakir region experiences mass atrocities and human rights violations hidden beneath the mask of curfews. It seems that for now, North Kurdistan will have to continue waiting for the world to listen.

All photos by the author. 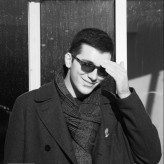 Đorđe Bojović graduated as a lawyer from the Law School at the University of Belgrade, specializing International Law. He also attended the American University in Kosovo, in its Post-Conflict Transformation and Development Program. He has been engaged in various civic initiatives in Serbia and the region of former Yugoslavia, mostly related to human rights, political freedoms and war crimes. Within the YIHR has worked since 2012 on the development of activist networks, the program of transitional justice and regional cooperation programs.Đorđe is a head of the Program Department at the European Grassroots Antiracist Movement in Paris, where he currently lives and works.