A State of War follows two Ukrainian marines over the course of one year as they serve, live and fight in the shadow of Shyrokyne, a ruined seaside resort town in Donetsk Oblast. Elena, 23, is a combat medic, one of the few women on the front, and a volunteer who has found purpose and identity through the war. Viktor, 35, was conscripted and served as a frontline commander. Now, retired from the army, he struggles to find work and to come to terms with the death of a young man under his command. Together, the unique and contradictory experiences of Elena and Viktor form the singular story of a society changed by three years of war.

With additional post-production consulting credit to Nick A. Cohen. 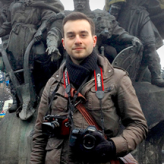