We’d all like to see more politicians engage with the public on social media. But sometimes Twitter diplomacy becomes rather undiplomatic. In the Balkans, politicians sometimes use social media to intimidate journalists or their opponents. Worse, they use it to defame anyone who disagrees with them politically as an enemy of an entire people. This is dangerous.

Earlier this week, we published observations about the way a handful of politicians in Prishtina and others in their orbit tweeted about Kosovo’s elections. We were concerned that what appeared to be a Twitter rumor — that Serbia’s EU bid was endangered  in the wake of Sunday’s election violence — was spreading like an established fact. Soon, the international media was publishing similar information, concluding (rather prematurely) that the hooliganism in northern Kosovo had jeopardized Serbia’s “EU hopes”. It appeared to us that this idea was being circulated without any verification from a senior EU official. (We were right).

This is a region where the spread of false rumors has led to the loss of human life. As any reader of our magazine is well aware, we do not reserve criticism or praise for any one government. Yet questioning the wisdom of public officials passing judgment (via Twitter) on the EU accession process of a country with whom they’re actively engaged in EU-brokered negotiations has, unfortunately, opened us up to vicious criticism and even threats.

We’re not naive and are well aware that this sort of thing comes with the territory. Still, we think it’s important to respond so that nobody gets the wrong idea and thinks we’ll be intimidated into not reporting on whatever we find newsworthy. Nor will it destroy our alliances and friendships with the people of Kosovo.

A few days ago, we engaged in a rather harsh Twitter exchange with Petrit Selimi, Kosovo’s Deputy Minister of Foreign Affairs and (until this week) a regular Balkanist reader. According to friends back home in the U.S., Selimi even spoke about our magazine during one of his recent lectures at Johns Hopkins University. We appreciated Selimi’s compliments, but have been vigilant about keeping a measure of professional distance from all politicians, since we’ve seen the corrosive effects that cozying up to power has had on the quality of information produced by certain establishment journalists. Here’s how Selimi spoke of us before:

@UN‘s #Jeremic compared #Kosovars to #orcs once. Apparent taste for racist discourse made him a hero in some circles: http://t.co/WQ0kPxoeh5

Our “Twitter fight” with Selimi was initially more humorous than anything, and though we took minor offense at many of the things he tweeted about us (e.g. calling us “bloggers”), we still appreciated his willingness to engage in an open and public debate. Selimi has learned to use the microblogging platform Twitter to communicate with his constituency, the media, and the broader public. His e-literacy and e-diplomacy skills are undeniable, and other politicians in the region and beyond have much to learn from him.

That said, Selimi initiated a Twitter fight which lasted, on and off, for more than five hours. He then referenced us in a tweet the next day, comparing us (a team of mixed nationality and religion) to “old Belgrade-based” media — one can assume he meant that of dictator Slobodan Milosevic.

Today, he called me a “devious liar” for criticizing the dissemination of false information about a diplomatically sensitive subject. And in the past 24 hours or so, his rhetoric has changed. Now he’s attempting to paint anyone who criticizes him as an enemy of his entire people.

@Balkanist Oh a little propaganda and untruthful exercise from your blog. For this, you have unfollow from me.

He also left a 200-word complaint in our comments section.

Here are Selimi’s numerically-ordered criticisms which he posted on our “blog”. We will respond to each of them one by one.

Again, the speed with which certain politicians in Prishtina — and foreign journalists — publicly declared Serbia’s EU bid “threatened” was alarming. In fact, several members of the government (including Selimi) started spreading this piece of information on Twitter the same evening as the elections. To make that sort of pronouncement without an investigation (or a phone call to Brussels) was irresponsible, especially in the midst of a volatile security situation that could have spread. Driart Elshani, Kosovo’s head of e-governance, issued one of these early tweets in English (retweeted by Selimi, among others):

#Kosovo likely to emerge stronger after these local elections. Whereas Serbia likely to jeopardise its #EU bid after tensions in the north. 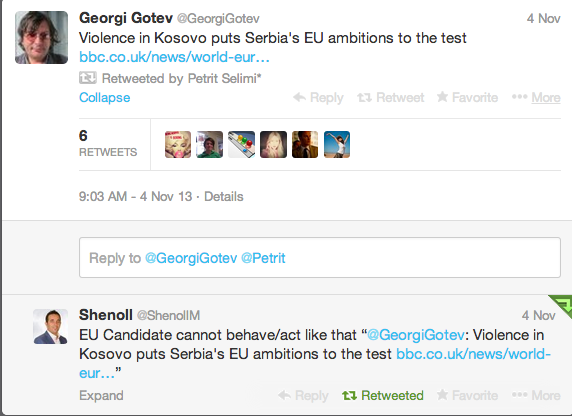 It’s also difficult to understand why any official would be gloating over this “fact”, especially since Serbia’s European integration is supposed to improve regional security. After so many years of conflict, one can only view peace as a positive development.

On “propagandism”: Only dictators think criticizing a single action (in this case, tweeting) is the same as mass propaganda aimed at overthrowing an entire system. The majority of politicians in the Balkans — including Selimi — would not last a second in American or British politics, where “bloggers” are very nasty — even when they agree with you about other things. Since Selimi and I attended the same university in Britain, I assume he is aware of this.

Yet Petrit wasn’t the only individual who had an extreme response to our tweet critique. One anonymous individual who claimed to be a diplomat from Kosovo warned us darkly: “Don’t think you can write about whatever you want”.

As most people know, the “Kosovo is Turkey, Turkey is Kosovo” line dominated the news in the week or so leading up to the elections, triggering a diplomatic row and plenty of media attention. Unfortunately, Selimi seems to think reporting on his newsworthy repetition of this line somehow requires the media to report on other parts of his speech — even though they weren’t made public (in English) until later. Of course, adding Germany and America would mean adding a discussion about Kosovo’s history and current relations with the two countries, something that was beyond the scope of the article.

Petrit is well aware that we’ve never claimed he was anti-Semitic. At the same time, we must note that he falsely claimed we did in order to publicize his own altruism.

As a half-Jew I thank Selimi for this truly selfless act.

Here are a few choice tweets from our Twitter exchange, which you can view in its entirety on Twitter:

@lilyslynch Read my tweets. Since you are writing about them, be a professional not a superficial prejudicial propagandist.

We think it is Selimi who was being unprofessional when he, as a diplomat for the Ministry of Foreign Affairs, chose to circulate and refer to this article on more than one occasion and without reviewing its contents.

For the first time in history, a “blog” is accused of silencing political power. Why aren’t there any international organizations out there to help politicians who’ve been criticized by blogs? Where is the justice? We reject the “yellow press” accusation Selimi and a few of his followers (as well as supporters of Erdogan, whose police gassed us in Istanbul this summer while we were sitting at a restaurant) lodged at us. We actually think we did the job many people in the government did not do.

Typically, older men in positions of power who call women “lady” and tell them they have “bad manners” are called “sexist”. We urge Selimi to use more sensitive language next time he talks to a woman he disagrees with about something. It is our hope that the re-run of elections in northern Kosovo on November 17 go smoothly for people of all nationalities, and that everyone involved refrains from disseminating critical information until all the facts are in, the votes are counted, and everyone is safe.

Lily is co-founder and editor-in-chief of Balkanist Magazine. She lives in Belgrade, Serbia. https://www.instagram.com/lynch.lily/