Serbian media outlets Politika and Večernje novosti and local tabloids were strangely silent about the photos from the tennis finals in Umag, but comments exploded on social networks and portals. In the photos, Croatian president Kolinda Grabar-Kitarović was pictured with the world’s best tennis player, Novak Đoković. The Serbian tennis player had already reached the heavenly heights of Serbian patriotism, having won Wimbledon just after the British declaration on the Srebrenica genocide, which was seen in Serbia as a declaration that Serbs were a pedophilic and genocidal nation. But caught red-handed as he made friends with Kitarović, the HDZ radical — and on the eve of the anniversary of Operation Storm, no less — not even Đoković could be faultless, no longer the ideal mythological Serbian avenger, no longer even a Serb.

Between us, he made an unforgivable mistake back in 2007 when he was mistaken as Croatian at an American tennis tournament. His response was, “It doesn’t matter that you called me a Croat – Serb, Croat, it’s all the same.” What’s more, he proved his guilt again in 2013 when he said in an interview with Jutarnji List:

“I would again rise above the swampy waters of nationalism, as you said. For foreigners, it’s very difficult to differentiate between our peoples, our borders, who and what we are. That’s why I didn’t take it personally, nor did I try to explain it, because I know how much effort it takes to explain where I come from and where those mountainous Balkans are.”

Still, he wins tournaments, so he’s forgiven for these remarks – indeed, because he’s young, he has yet to understand what has happened and what might yet happen.

The Montenegrin with a Croat mother

If we summarize the fierce reactions of commentators on regional portals, it seems that the crux of this matter lies in the reaction itself.

“On the eve of the tennis finals in the Croatian town of Umag, the Serbian tennis player of Montenegrin origin, Novak Đoković, whose mother is a Croat from Vinkovac, had a short, friendly chat with Croatia’s President, Kolinda Grabar Kitarović. He promoted Croatian tourism in the company of a politician who shamelessly denies the Ustasha crimes against the Serbs in World War II. While the high-ranking swimmer Milorad Čavić was disqualified from a tournament because he wore a shirt that said ‘Kosovo is Serbia,’ Đoković didn’t even play for the Serbian team against Argentina in the Davis Cup. He did, however, find the time to meet with the radical HDZ member and chat, apparently about returning signs in Cyrillic to state institutions in Croatia. There are no details on whether they went to ‘Lora’ for coffee after the meeting.”

Another write-up of the same event, on the same portals (state television RTS, RTV, B92), could have said:

“Top sportsman, polite young man, true representative of the average citizen, agreed to be photographed with the president of neighbouring Croatia, taking national interests to heart — behaving like a real ambassador of Serbia. He’s a king; thank God he’s alive at the same time as I am – a true Serb to be proud of!”

Other comments were attempts at a ‘deeper’ analysis of the problems of Serbs and Croats, reflections that the war was over, and that one had to communicate in more rational ways. The more lascivious among them were generally vulgar, the most benign being on the subject of whether one would convert to Catholicism for Kolinda. Commentators from Croatia also dropped in on B92 to give short lectures.

At par with the unforgettable Parlov

“Neighbours, be pleased that you have an athlete who’s on par only with Parlov, Ćosić, Dražen… in both knowledge of the sport and in endurance. In terms of politics, Novak should assemble all the heads of state of the ex-Yugoslavia in a stadium twice a year and give them lectures on tolerance, persistence, friendship, anti-xenophobia, worldly thought, and all the other things that are missing from the minds of our heads of state,” writes ZG TOM.  He adds that “currently in Croatia, there isn’t an athlete at that level, let alone with such a positive outlook and demeanor.”

Now just so there’s no confusion, the Đoković family hails from Montenegro, but Đoković is a ‘Montenegrin’ as far as this has become a moniker for a traitor, since the country has recognized Kosovo’s independence. A ‘Croat on his mother’s side’– which for some commentators who remember the 1990s means a ‘full Croat’ — doesn’t warrant explanation. A commenter on B92 lectures us on patriotism:

“Oh Novak, Wimbledon and all those trophies are worthless. But come on… Maybe she called him to mark the 20th anniversary since the expulsion of the Serbs from Croatia… Maybe he’s a real Montenegrin.” 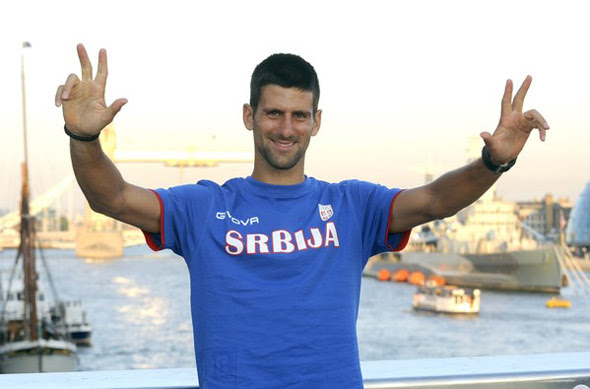 The number one tennis player got a ‘big minus’ from one reader, another had a ‘bitter taste in his mouth’, while another started ‘rooting for Rafa’. A polemic began, and even Croats didn’t stand behind Đoković, labeling him a leech.

The honour of Belgrade’s cowardly patriotic press was saved by the Swiss-German owned Blic, which published the most egregious fabrication of all. Relying on the words of an unidentified source, the title was “Kolinda ambushes Nole.”

“He was a guest at the tournament, and he ran into Kolinda in the VIP zone, where she begged him to take a photo with her. Nole is incredibly polite and couldn’t refuse, especially since he was taking photos with anyone who asked,” says Blic, citing a ‘friend of Novak’s who was at the tournament.’ He didn’t think of taking photos with a politician, but it just happened. “It would have been bad if he’d been impolite. This way, he showed that Serbs are good and courteous young men.”

We play tennis all right, but boy can we fight

To make this all a little more ‘Serbianized’, the Blic story is positioned next to photos of the Croatian president with Aleksandar Vučić (at her inauguration) and Tomislav Nikolić (at a regional assembly in Budva).

There’s no unity among the Serbs, even though Đoković is proof that even great enemies like Britain can be defeated. He’s won Wimbledon, and one analyst, former basketball representative Ljubodrag Duci Simonović, has called him an ‘exponential, great supra-national capital, a player of the international’. There’s no mythological agreement (you don’t want to know what that is), not even about the patriotic mission of Novak Đoković. And it can only be compared with a crucial, nearly forgotten accomplishment of an old-time Belgrade mayor named Tankosić. Trust me, you want to hear this — it has to do with the immutable fact that the British hate the Serbs (more than all the others, of course). The Belgrade tabloid Kurir wrote about it after Đoković’s triumph in London. Namely — no one knows why — but Winston Churchill, writing from the Second Boer War, composed an article insulting the Serbs. As was customary in Belgrade at the time, the text was read aloud in a Belgrade bar. The mayor, Tankosić, heard it and exclaimed that if he ever had the chance, he would beat Churchill up. Indeed, Churchill was returning to England on the Orient Express, which stopped for a few hours in Belgrade. Churchill exited the train to eat and stretch his legs, stopped by the Greek Queen kafana and – no one knows who recognized him and how – the mayor was informed of his arrival. Vojislav from the Greek Queen ran over to the Zeleni Venac to complain to the mayor that Churchill had addressed him somewhat impolitely. The mayor then royally beat him, so that the future British Prime Minister would have to be escorted to his train by the police. We know what happened after that. Churchill supported Tito’s Partisans out of spite instead of the Chetniks, and here we are. That’s how it was, why believe the foreign propaganda? It’s a matter of homogenization, not a photo with a really problematic fan. As for diplomacy…

Originally written by Bojan Tončić and published on Lupiga.Com. Translated and edited by Balkanist. Republished with permission.

Balkanist is an experimental, occasionally bilingual platform featuring politics, analysis, culture, and criticism for a smart international audience underwhelmed by what is currently on offer. Our aim is to provide bold, uncompromising coverage of the Balkan region and everything to its East.