It is tremendously courageous to make atrocities against all people your concern. It is radical to stand in the streets of places where there are no physical monuments and remind people that something happened, that people died, and that not remembering equals complicity. For those who organize movements like these, this is merely normal – neither traitorous nor heroic.

These words of Dizdar’s poem are engraved  onto the memorial of Tuzla’s Kapija massacre, which happened just over 20 years ago on May 25th, 1995. Dizdar’s poem is written to a child, a baby who has come into the world without words or teeth to protect it. 20 years ago, young people from Tuzla were gathered in the main square, celebrating what was in the old Yugoslavia the Day of Youth. Shelling was common, but townspeople said they generally knew when to expect it – primarily for holidays like Eid, Easter, Christmas. No one thought that the Day of Youth would be a day for bombs, and so they gathered. Artillery fired from the mountains outside Tuzla from the army of Republika Srpska killed 71 people, and wounded about 200. The average age of the victims was 23. The killing of Tuzla’s youth is now commemorated with Dizdar’s warning for the newborn – this is a thankless world, and a thankless place. Here people die so others can live.

The massacre in Tuzla remains an unpunished crime. Novak Djukic, who commanded the Ozren Tactical Group of the Bosnian Serb Army, and ordered the attack on the town, fled to Serbia last year. He was convicted for war crimes in Bosnia and sentenced to 20 years in prison but then released on a technicality. He fled before the retrial and Serbia currently refuses to extradite him. The wound is open and the story unfinished.

I was struck by the memorializations that took place on the anniversary of the massacre. As part of the memorials in Tuzla, a group of young activists from Serbia handed over a book of condolences signed by Serbian citizens of Serbia to Tuzla’s mayor. Their slogan was ”too young to remember, determined to never forget”. For a week prior, the activists stood in the centres of large towns in Serbia with the names of the victims killed at the Kapija, asking people to sign the book of condolences. People did sign it, but there was also hostility. The activists were guarded by police, were sworn at, called traitors, Serb-haters, Serbophobes, and fascists. A group of young men even tore up the book. The mainstream Serbian media were completely silent about the initiative.

It is difficult to locate or note a lack of commemoration, or to quantify silence, but certain silences are impossible to ignore. It is telling that many actions like these, which force people to remember, are met with open hostility. The comments on online posts remembering the massacre were similar to what these activists heard on the streets of Serbia: What about Serbian war victims? What about dead Serbian children? What about other countries who’ve done wrong? What about other unpunished crimes? It is a question consistently posed to activists in Serbia: “Were they ours or theirs?”

The failure to take one moment of pause to acknowledge the pain of others before recalling your own losses is both sad and counter-productive. Because some Serbs in Serbia, Bosnia, and Croatia believe that the criminal proceedings in The Hague are tilted against them, segments of the community likewise feel that their losses are forgotten. There is a sense, not entirely unfounded, that the international community and courts fail to speak of Serbian victims, of forced displacement from Croatia’s Krajina, of camps and killings, of loss. The opinion seems to be that acknowledging the pain of the other is too much to ask of people for whom their own pain is still so raw.  Hence the urge to relativize losses and war crimes, to minimize the pain of the other, to prioritize yours over theirs. Yet the first step towards your pain being acknowledged is to acknowledge the pain of the other and accept that doing so does not imperil you. Haris Jusufovic writes on the inability of Sarajevo to publicly come to terms with the killings of Sarajevo Serbs by government militias, and the need to excavate these skeletons of the past in order to have a future.

As Tuzlan rapper Frenkie notes in his song ‘Pismo Milanu,’

Taking the time and effort to offer one another condolences is hard but not traitorous. It is the first step towards a culture of memory which does not choose whom to mourn based on their ethnic belonging. It would be the first step towards the mourning of all victims. As Ljupko Miseljic points out in his recent blog post, the concept of collective empathy in Bosnia is routinely replaced by selective memory and empathy only towards certain groups. What does it mean to be against the deaths of Bosnian or Serbian babies if you are not against the political practices that make the deaths of children of all tribes possible and permissible?  What does it mean to be against these deaths if you are not against war?

3,372 children were killed in the war in Bosnia, all too young to subscribe to the ideologies and collective identities that they were killed in the name of. And as the names of the victims demonstrate, the civilians killed in the Kapija massacre in Tuzla did not belong to just one ethnic group or religious community. The Dizdar poem would suggest that they were born into a place where they had to die so that others could live. If this is true, then those who live have a debt to repay: to not forget the dead, to not stop fighting the powers that would divide us into “ours and theirs,” before we are even able mourn.

The nature of political memory is such that the ways we choose to remember the past depends on how we experience the present and imagine the future. The present determines how broader historical narratives are used to make chaos and pain legible. Monuments in the Federation and Republika Srpska to the soldiers and civilians of the various war-time causes can seem mutually exclusive because they call upon competing narratives to make sense of these deaths. All groups harken back to periods of persecution and resistance in their own histories. There are no memorials that mourn all of the victims of war at once, but there ought to be ways of memorializing that leave room for the pain of others.

For Tuzla, the contemporary narrative that helps it make its past and present legible is that of a city with a long legacy of resistance and non-nationalism. The second part of the Kapija memorial states that it was here that “the Serbian fascist aggressor cut short 71 young lives.” The language is stark, yet the use of the word ‘fascist’ draws on the strong antifascist tradition in Bosnia and Herzegovina and moves the issue past one of mere nationalism.  Tuzla sees itself as a city liberated from fascism not once but twice, and as a place where “civic non-nationalism” blossoms. Because Tuzla was one of the only places where leftist non-nationalist parties ruled in the 1990s, it remained a multi-ethnic city during the war, and its Army of BiH (ARBiH) divisions were populated with soldiers from all groups. The victims of the Kapija were not a homogenous group – they were Tuzlans of all creeds. Rather than be buried separately, by religion, all 71 are buried together in the Slana Banja memorial complex.

Today is White Armband Day in Bosnia, marking the time in 1992 when the war time Bosnian Serb authorities in the town of Prijedor ordered all non-Serbs to mark their houses with white blankets, and to wear white armbands in public. This preceded a massacre of civilians and children, massive displacement, and internment in camps. Because Prijedor is in the Republika Srpska, there are no monuments to these victims. People across Bosnia, of all ethnic groups, will wear white armbands today – a striking form of remembrance which seeks to ensure that these people are not forgotten despite efforts to erase them. It is a powerful movement for citizens to unite in this kind of commemoration. Participants see it as a part of the wider struggle against fascism – fascism being the power that differentiates us, that marks groups of us as unworthy of life, that destroys human empathy.

The activists organizing these efforts belong to a group called Jer me se tiče–Because It Concerns Me. This stance remains uncommon in a place where the narratives told to youth depend on the entity or canton they were raised in, or even what side of town they went to school in. Too often divided by ethnicity and religion, the postwar generations are not taught that “it concerns them”. Thus it is tremendously courageous to make atrocities against all people your concern. It is radical to stand in the streets of places where there are no physical monuments and remind people that something happened, that people died, and that not remembering equals complicity. For the mostly young activists who organize movements like these, this is merely normal – neither traitorous nor heroic. The call that Jer me se tiče makes is hard to ignore: Budimo ljudi.

Let us be human. 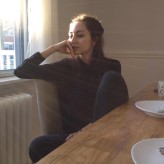 Tea Hadziristic writes about gender, politics, and history. She lives in Toronto.