Tavriya Simferopol were the first ever champions of an independent Ukraine, but were dissolved following the annexation of Crimea.  Over a year later, there are two separate clubs that go by that name. Vadim Furmanov tells the story of the two Tavriyas – and which of them can lay claim to being the true successor.

Though not as widely known as giants Dynamo Kyiv and Shakhtar Donetsk, Tavriya Simferopol are one of the most storied clubs in Ukrainian football. They won the inaugural Ukrainian league after defeating Dynamo in the one-off final in 1992, and to this day are the only club outside the big two to have won the Ukrainian title. Tavriya also won the Ukrainian Cup, and were just one of four clubs to have spent every season in the top flight since Ukraine gained independence – until last season.

Following Russia’s invasion and illegal annexation of the Black Sea peninsula in March 2014, Tavriya’s future suddenly became uncertain. They continued to play in the Ukrainian Premier League despite Crimea’s de facto annexation by the Russian Federation for the duration of the season, and finished in the relegation zone for the first time in their history.

Not that it mattered. When the season ended, the club was officially dissolved, then reformed and registered as an entirely separate entity under Russian law. The club was even renamed, from Sports Club Tavriya Simferopol to Football Club Tavriya Simferopol Crimea. The crest remained exactly the same, with only the text featuring the name changed.

These alterations may sound cosmetic, but the ramifications were serious. The new Tavriya, along with two other “reformed” Crimean clubs, FC Sevastopol and Zhemchuzhyna Yalta, entered the Russian league system and took part in the early rounds of the Russian Cup.

UEFA did not recognize these results and in December 2014, officially banned Crimean clubs from taking part in Russian competitions.

The decision was inevitable. According to UEFA and FIFA regulations, clubs are only allowed to change federations with the consent of both parties, and obviously Ukraine was never going to allow any such thing to happen.

In addition, had UEFA allowed Crimean clubs to participate in the Russian league and cup, this would have been interpreted as an official recognition of Crimea as part of Russia – a move that has yet to be recognized by any major international governing body or organization.

But shortly after banning Crimean clubs from competing in the Russian league, UEFA began to seek a solution. In early 2015, they proposed the establishment of a league that would operate independently of both the Russian Football Union and the Football Federation of Ukraine.

The project received support from both the Russian and Ukrainian sides. Ukrainian authorities did not stand in the way of its formation, as it had no formal ties with Russia and thus did not represent an attempt to legitimize the annexation of Crimea.

Hryhoriy Surkis, the former president of the Football Federation of Ukraine and currently a vice president of UEFA, said that he did not see anything harmful in the formation of an independent league in Crimea, but reiterated that Crimean football remains under the jurisdiction of Ukraine since the territory is “temporarily annexed.”

Serhiy Kunitsyn, the former president of Tavriya who left the peninsula following the annexation and is now vice president of the FFU, said in an interview with the BBC that “we have no right to destroy football in Crimea – they’re not all terrorists and separatists who hate Ukraine.”

The Russian side also accepted UEFA’s compromise. Vitaliy Mutko, the Russian Federation’s minister of sports, confirmed that the league has no formal ties with Russia, and that the Russian national anthem will not be played before matches. Mutko also stressed that “the Crimean championship will take place under the jurisdiction of UEFA.” Nevertheless, much of its financing will come from Russian coffers.

While Crimean officials were busy planning the new competition, a separate project to resurrect the original Tavriya was getting underway on the mainland. On June 18, Andriy Pavelko, the President of the Football Federation of Ukraine, revealed plans to move and re-establish Tavriya in the Ukrainian city of Kherson, 220 kilometers away from Simferopol.

The project is now underway. Kunitsyn recently announced that the new Tavriya does not intend to rejoin the Ukrainian league system from the bottom, but will rather immediately gain entry into the Premier League. “We are looking for a legal procedure with members of the FFU so that Tavryia can immediately play in the Premier League,” he said. Tavriya will reportedly receive assistance from UEFA to build a new stadium, and Pavelko has even suggested that other Ukrainian clubs “lend” their players to help Tavriya get off to a running start.

The Crimean League kicked off on August 23 with a 2-2 draw with Tavriya and FC Sevastopol. Assuming the Crimean League lasts longer than a season and the plans to resurrect Tavryia in Kherson do come to fruition, there’s a strong possibility that there will be two clubs with the same name competing next season, in two separate leagues.

This scenario naturally begs the question of which of these two clubs should be seen as the successor to the historic club that became the first champions of Ukraine.

The Tavriya now based in Simferopol are categorically not the successor to the original. Tavriya has always been a Ukrainian club.  It was founded in 1958, four years after the transfer of the Crimean Autonomous Soviet Socialist Republic from the Russian SFSR to the Ukrainian SSR. Through much of its pre-independence history it competed in the Championship of the Ukrainian SSR and the local Ukrainian Cup, and in the independence era it represented Ukraine in European competitions on four occasions.

Furthermore, most of the club’s former ownership, players, and adamantly pro-Ukraine ultras fled Crimea following the illegal annexation. Tavriya’s reformation as a new entity under Russian law, despite retaining the name, badge, and colors of the original, represents a brazen attempt by Russian authorities to co-opt what has historically been a thoroughly Ukrainian institution. While UEFA is powerless to prevent such an act from taking place, its ban on Crimean clubs taking part in Russian competitions at least prevents the potentially irreparable tarnishing of the Tavriya name.

The Tavriya that will be based in Kherson has a stronger claim to being the legitimate successor to the original. The resurrection project is spearheaded by the former president, the aforementioned Serhiy Kunitsyn, In addition, even though it will not be playing in its original home of Simferopol, the indefinite exile of a club from an occupied region is not unprecedented in European football – both Qarabag FK of Azerbaijan and Spartaki Tskhinvali of Georgia retain the name of their home cities, despite playing far from home.

But questions must also be asked of the Ukrainian revival project. In the current economic climate, many historic clubs are facing grave financial difficulties. Metalist Kharkiv have been in a state of perpetual crisis since owner Serhiy Kurchenko fled the country following the Maidan Revolution, and Metalurh Zaporizhya have already withdrawn from the league, leaving the competition with just thirteen teams. Meanwhile, Kherson already has a football club, with a stadium, who play in the third division of Ukrainian football.

The Ukrainian officials’ point of view is understandable, as the symbolic value of Tavriya is huge. They want to demonstrate how a Ukrainian institution from Crimea lives on, despite Russia’s occupation of the region. But the move may also be interpreted as unfair by other struggling clubs, especially if Tavryia receives financial assistance to build a new stadium in a city that already has one.

The dissolution of the original Tavryia following the conclusion of the 2013-14 season symbolized the de facto end of Crimea’s existence as part of Ukraine. Over a year later, the two separate revivals provides a glimpse into the region’s current status.

The Tavriya based in Simferopol and the founding of a separate Crimean league demonstrates Crimea’s isolation from the rest of Europe, despite its incorporation into the Russian Federation. Meanwhile, the planned Kherson-based Tavriya represents Ukraine’s unyielding claim to its rightful territory, despite the current occupation. 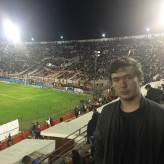 Vadim Furmanov is a recent graduate of the University of Chicago with a Bachelor's Degree in Political Science.  Originally from Kyiv, he now lives in Chicago and supports both Dynamo Kyiv and the Chicago Fire.  He writes extensively about Ukrainian football, primarily for Futbolgrad.  Follow him on twitter @vfurmanov.