In places like Russia, the news is more like a government-owned resource. And the government gets to set the agenda on how said resource will be exploited. If you’re not giving the government what it wants (or getting a little too uppity or bothersome) – you’re usually screwed.

I’ve worked for both English-language Russian state media and Western independent media. I’ve been lucky so far. Lucky for having intelligent editors who set good standards, for being able to speak my mind, for being able to walk away when facing censorship. Lucky that I’m still, at this stage in the game, able to feed my family (on a diminishing income). Lucky that I’m not an exploited freelancer in a conflict zone (for now, anyway).

But the more online harassment I experience, the more threats I receive, the more insults (many of them gender-based, others aimed at my complicated cultural and ethnic heritage) I hear, the more I have to wonder if I’m tough enough.

When I was writing about the fateful 2010 winter election in Kiev, there was an incident I’ve been loath to talk about. Perhaps a couple of my friends know. It made me feel vulnerable and unprofessional at the time. I certainly didn’t want to complain and make it seem as though I was afraid of anything.

I had argued with a security guard near a polling station. He insisted I couldn’t be on the sidewalk, talking to people. He thumped me on my chest and pushed me hard. I went flying on the black ice that seemed to encrust every surface that winter, landing on my back, hitting my head in the process. After the immediate shock and pain wore off, I let a woman who had just voted help me up. The guard had scampered off. I went back to doing my job.

The incident stayed with me, because the pain stayed. I had problems with my back before, but that one bad fall caused chronic pain that lasted for over a year. After I got pregnant, I had to seek out specialists capable of helping pregnant women with severe back pain. The pain sapped my strength and bank account. It still flares up every once in a while. X-rays so far have been inconclusive, and I am convinced that a part of it starts in the mind. Chronic pain is complicated, but it has its roots. Some are abstract.

I’ve been both a reporter and a pundit – a reporter takes risks in the field, only to be shouted at for bias. A pundit feels like Cassandra with tongue in place, but no one listening anyway. Everyone is down in the comments section, bitching about how you’re the wrong ethnicity to have an opinion on some matter, while others are busy e-mailing you detailed odes on how awesome it would be when you’re finally gang-raped.

“You go out there and do your job!” People shout at me on the internet, from the comfort of their homes. I’m remembering the first story I did for The Moscow News – on a neo-Nazi stabbing in southwest Moscow. I visited the scene of the crime, talked to the neighbors of the victim, talked to the crying wife on the phone outside. On my way back, I had to walk through an apple orchard at dusk. Two guys began following me. They weren’t neo-Nazis, they were thugs, enraged at seeing a reporter asking questions “without permission” on their territory. Didn’t I know I could be “punished”? There was no one else around. We were in the middle of a major city at peacetime, but in a second it was brought home to me – how unsafe I was. I let them catch up with me, joked with them, bummed a cigarette off of one of them, discussed my story. I smiled at them. They eventually began smiling back.

Female journalists are lectured on “using our looks” and following “the principles of feminism.” We’re still seen as women first and journalists second – hello, “mother of three” headline! – but we must pretend as though this isn’t really so in our work.

In the company of bad men, however, there are no illusions. You appeal directly to their strength. A strong man wouldn’t need to prove his strength by hurting a girl-reporter, would he? Except sometimes, he would.

Our readers hate us. We hate each other. When I joke about dick-measuring contests on Twitter, I’m not really joking. Professional solidarity usually only appears when someone gets their head cut off – to be quickly forgotten.

Everyone knows that you don’t get ahead by being the best. You get ahead by proving that the others are worthless.

If you’re a young woman, prepare for the possibility of getting harassed, raped, or simply used by colleagues you look up to. And then, of course, they’ll tell their friends that you only got that one gig because [insert body part, outfit, etc]. Hoity toity male journalists will punish you for admiring them as surely as they will punish you for not admiring them.

(And if you’re ever, say, attacked while doing your job – men will continue writing hit-pieces about it, minimizing your suffering while making your entire job about your looks. And when you start getting older, people will begin getting mad at you about it – and asking why the hell are you still on TV, you fat cow)

In times of conflict and tension, you will be seen as a tool first and a person second – by everyone from the security services to Jim-Bob who’s never frozen his ass off at a demo that swiftly erupts into violence when the boys with the batons move in, but will still write your bosses and demand you be fired for your “pro-[insert whatever it is that Jim-Bob doesn’t like at that moment] coverage.”

The late Andrei Stenin got the pro-Russia rebels in eastern Ukraine to trust him – so now I’m constantly being told that he deserved his death. Meanwhile a friend has reported extensively on the right-wing Azov battalion on the Ukraine side – only to be accused of being a “Nazi sympathizer” in the process.

When you acknowledge the pressure you are under, you’re weak and hysterical. When you don’t acknowledge it, it begins to do your head in.

I was in a bar in Kiev with a cousin last month, when your typical Douchebag Expat Stereotype who’d only been in the country for a couple of weeks but had oodles of opinions he was dying to share sidled up to us. In the course of trying not to talk to him, I found out that he follows the work of a friend of mine who has been reporting on the armed conflict in the Donbass. “He’s just so biased! And so cocky!” Douchebag Expat Stereotype ranted.

“So why don’t you go out there and show him how it’s done,” I replied – then instantly regretted my words.

The last thing you want to do is give a self-assured blowhard the idea that he can do this kind of job.

Meanwhile, one of the defining characteristics of the human race is our need to tell stories, to bear witness – and to pass the information on. I think that people tend to get into journalism because they’re human. And a little crazy. It’s a calling – in the sense that a pied piper is playing a tune somewhere. You stumble off the safer path and follow the song. You live to regret it and you live to love it – sometimes in equal measure.

This article was originally published on Natalia Antonova’s website. She generously gave us permission to republish it here. 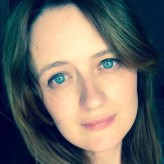 Natalia Antonova is an American journalist and playwright from the former USSR. She grew up in North Carolina.