Author and journalist Boris Mrkela recounts his first post-war visit to Sarajevo and his eventual decision to move to the city from his native Banja Luka while his “feet still stank” of his soldier’s boots.

The homeland can also be defended with silence, especially if you fought for her unwillingly. I listened politely as my father tried to talk me out of going to Sarajevo. For those who no longer crossed that border, the fear of other peoples only needed to be implied. Instead of telling him that I had a clean conscience and therefore nothing to fear, I cut him off in the worst possible way: “You were fine letting me go off to war; you’ve got no right to give me advice now.”

The war had ended a year ago, but still no buses traveled between the once-warring sides, as though hundreds of thousands of people did not long to return to the homes they had fled. The hungry were left with the Deutschmark and nothing to buy with it; the only harvest they greeted was NATO’s collection of discarded arms. Foreign troops lined the former front, and thousands of decommissioned soldiers filled the streets. The arrests of one-time heroes and leaders had not yet begun, but they would soon find themselves scattered across international courts, tried as executioners and war criminals.

Private cars, meanwhile, could not cross from one town to the next – in some cases, from one side of town to the other – because license plates bore one of the three ethnic crests of the divided country: the four S’s, the checkers, or the lilies. Tough guys in leather jackets worked around this problem by driving without plates at night, after the police patrols ended. The only vehicles that could travel freely across these invisible boundaries were those belonging to international organizations like the UN and the OSCE.

“Take the number 3 tram and go to the last station,” advised the driver who dropped us off at the edge of the city, and who would be back in three days. We hadn’t brought toothbrushes or spare underpants, as one might when visiting a foreign country or relatives. We looked like students who’d just gotten out of class, but we felt like trespassers.

The tram was packed, and the ride was long. We would get off where everyone else did. Out of nerves, I forced a smile to hide my uncertainty. Around us passed gray blocks of towers, walls pierced by bullets, windows patched with plastic sheets bearing the American flag, and empty balconies. As we looked forward to the road to Sarajevo, we spoke little.

When the tram began to be more empty than full, I pulled out a crumpled piece of paper from my pocket to check the address of our destination. I searched among the passengers for someone who might take pity on us and help us find our way. I chose an older man in a black beret – the kind with the little wick in the middle. My father had worn a similar one at the beginning of the war until someone attacked him in the street, believing him to be a Muslim. He never told me this; I only found out about it from my mother when I returned from the front and noticed he had taken to wearing a fedora when he went into the city. This was how – other than in my boots – a war he only knew from the radio had stepped into his home.

“Excuse me, do you maybe know how I could get to this address?” I asked the old man. I stuttered at the end of my question.

Relieved, I thanked him, and sat down.

We walked through a crowded suburb that had recently been “exchanged” according to the boundaries set at a peace conference in America. Thousands of people of my ethnicity had left the city then. It seems it was easier to live with bullets and bombs than with people who, after a four-year siege, wanted to return to their homes.

Watching the mass of people who pressed around me, I wondered if they would all turn their heads if someone called out my name, giving me away. As if she could read my thoughts, my friend walked a few paces behind me, as though we only happened to be heading in the same direction.

“Where are you from?” the old man asked.

After a short pause I managed to blurt, “Karlovac.” The driver who’d dropped us off that morning had stopped at a rest stop where they served Karlovac Beer.

I paused. I didn’t know what to say, but then I realized that he must mean the river that ran through the city – and with which the beer was likely brewed.

Just at that moment, we saw the bridge.

“Go straight, and when you hit the parking lot, you’ll find the street you’re looking for,” he said. I thanked him.

Several months later, when I returned to Sarajevo in search of work, I was prepared not to lie, and to name my hometown.

“And when did you leave?” a man once pressed in a bar, attracted by the foreigner I was sitting with. “Recently,” I replied, not wanting to drag out the conversation. I had taken off my soldier’s boots a long time ago, but I felt uncomfortable, as though my feet still stank of them.

I had not answered his real question though: are you one of “ours,” or one of “theirs”? Ten years later, I find it difficult to recall that feeling of discomfort. It had once been a constitutive part of the excitement that drew me to live in a city that could, at any moment, declare me a traitor.

Now I visit my parents by bus, once or twice a month. A few Eids ago, at a rest stop outside Jajce, a good-natured young man with a long beard and darker skin caught my gaze. I had already noticed him on the bus because his wife, covered in a burqa, had struggled to calm the baby crying in his father’s arms.

I was convinced he was a Wahhabi. Everyone, regardless of religion, was talking about the sect in those days. The Wahhabis spoke openly about the unjust war that had been waged on the Muslims, and about the unjust peace that had cemented our divisions. I suspected that revenge would not be abhorrent to them, but all I could say for certain about them was that they did not shake hands with women and non-believers like me.

After our eyes met, the young man circling the bus with the child in his arms approached me. “As-salamu alaykum.”

No one had ever greeted me in such a way. I froze. “Wa-Alaikum-Salaam.”

It was only polite for him to wish me a happy holiday. “Bajram barečula.”

“Allah razulah,” I responded, without thinking.

“Where are you going, brother?”

“May Allah keep you and protect you while you are there. You are brave. May He punish our enemies for the crimes and suffering they have inflicted on our brothers and sisters.”

I looked at him, and then at the boy. I did not respond.

“Do you have someone to spend the night with?” he asked. I was deep in the hole now and there was no coming back up. At least not honestly.

“My parents live there.”

“May Allah keep them. Do they live in their own home?”

“Yes…” I tried to change the subject. “The baby has calmed down?”

“He’s better, thank you for asking. Forgive me, I forgot to introduce myself: I am Bilal.”

“I’m…” I was afraid the man would think I had been making fun of him. I should lie. But I took his hand and sighed. “Boris.”

At my parent’s house, I excitedly recounted the episode.

“Be careful who you speak with, my son,” my worried father told me. “There are bandits everywhere.” 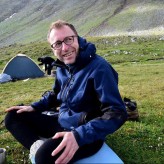 Boris Mrkela was born in 1969 in Banja Luka. He is a writer, journalist, and translator. His poetry first appeared in Banja Luka’s Putevi magazine after the war in Mostar’s Kolaps. He later began working on documentary films and since 2003 as an investigative journalist. He lives in Sarajevo.