11 July marks the twentieth anniversary of the Srebrenica genocide. Approaching this date, Dijana Jelača asks us to consider the weight of words and explores some ways to move forward.

(A shorter version of these remarks was originally delivered during the commemoration of the 20th anniversary of the Srebrenica genocide at Columbia University’s Harriman Institute, April 27, 2015.)

Tonight’s event, like many other events this year, marks the 20th anniversary of the Srebrenica genocide. Therefore, we are gathered here to remember. Twenty years is a time short enough for memories of the event to still remain a vivid and integral part of the lives of many. But it is also a time long enough for an entire new generation to have come of age in its aftermath.

For me, this brings up an important question: how is the memory of Srebrenica inherited and passed on? This is where it becomes crucially important how we talk about it (or do not talk about it). As a scholar of culture, I am often inclined to think about words and language as central to our lived experience.

In light of tragedies such as Srebrenica, words are not enough, and they often fail. But sometimes they are the only thing we have. How we talk about this event has great political resonance. What we call it carries weight, and this is why the term genocide has been such a contested terrain in and of itself.

Some have argued that focusing on the endless debates about whether this event was a genocide or not, and parsing the term’s meanings, takes us away from the human tragedies and pushes us more towards legal and bureaucratic technicalities that have nothing to do with human lives. This is certainly the case. But to dismiss the importance of words sometimes means also giving up on trying to reflect in those words the extent to which a criminal undertaking was a systematically organized and painstakingly carried out plan: from bussing, to executions, to mass graves, to moving the bodies to other, smaller mass graves, to systemic (and systematic) silence about these operations, and so on. All this took an enormous amount of planning, logistics and, most importantly, manpower. Therefore, insisting on a term that has been much politicized to various ends in Bosnia-Herzegovina is to also insist on not forgetting the extents of its logistical scope. It is a good place to start. Genocide is such a contested term because it has the power to implicate many, including those who stood by silently, versus implicating only a “few bad apples,” which is what the current Bosnian Serb leadership would like us to think.

Here we need to look no further than president of Republika Srpska Milorad Dodik’s recent visit to Srebrenica: he admitted a crime had happened, but quickly added that it has been heavily politicized – this from a person who uses the visit to the memorial site for his own political goals. One of them is to perpetuate the “few bad apples” explanation by way of exonerating many, the other to remind the public that it was the former members of his political opposition (SDS) who were responsible, and third, to remind us, yet again, that Bosnia has no future.

Accepting the systematic aspects of this criminal endeavor is not the same as collectivizing guilt. As Uglješa Vuković argues, “absolutism of collective guilt conceals those who carried out the crime, instigated it, aided it, and gave orders for it.” At the same time, we need to address the subsequent silence of the majority as one of the key sites where denial lives and gets passed on as a form of truth.

To that end, another important question that comes to mind is this: What happens to accountability in the generational transfer of denial? Can a generation that came of age in the light of denial and silence be held accountable for the event? Milorad Dodik himself has chimed in on this question and said that “unborn Serbian children can’t and won’t be held accountable for what happened two decades ago.”

But to insist on this erasure of accountability is to also elide the ways in which silence perpetuates and quietly supports the ideology that made such a crime possible. Therefore, we need to insist on a continued reckoning with Srebrenica as a site of mass crimes that have to be acknowledged – not as a way of accusing the new, unborn generations, but as a way to pass on the moral imperative of knowing to the generations that follow.

This responsible attitude towards knowing will most likely not be instigated by the political elites. It may have to be instigated at a grassroots level, as a part of everyday life and individual relationships to what we know and do not know, and especially to what we have to know even when it is so horrific that it cannot be fully knowable.

Many of these words – genocide, knowing, accountability, collective guilt – have indeed become heavily politicized, and fixed into singular meanings, or sometimes even caricatures of their meanings. We need to rethink their weight and use them responsibly because words do matter, especially when the transgenerational inheritance of a mass crime such as genocide (on either the side of survivors or the perpetrators) is concerned.

And while I do not expect politicians (at least not anymore) to use these words responsibly or acknowledge their more nuanced aspects, I am heartened that there are others who do. They may not be a majority (yet), but they have their ways of refusing to succumb to the simplicity of the dominant political discourse on any side.

For instance, the memorialization of the 20th anniversary of Srebrenica could and should be used as a site of remembering meaningfully and reflexively, so the crime is not forgotten, but also not politicized to ideological ends, and certainly not perpetuated in the future. To that end, I would like to highlight one initiative in Serbia, started by a Serbian journalist, Dušan Mašić. Mašić is working to organize 7000 people to commemorate Srebrenica on July 11th in Belgrade, by lying down in front of the Serbian parliament building. If it does happen, that kind of disruption of a public space associated with the political power that brought about the genocide – disruption by civilians who refuse to succumb to denial and forgetting – carries transformative potential.

It should not be an end, but the beginning of new, proactive approaches to remembering undertaken by all ethnic sides, for the sake of the generations who will inherit this memory one way or another – either through denial, political manipulation, or through a meaningful and ethically responsible address that carries transformative power. 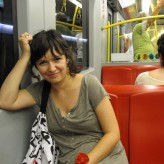 Dijana Jelača teaches in the Department of Rhetoric, Communication and Theater at St. John's University in New York. She holds a PhD in Communication from the University of Massachusetts, Amherst. Her areas of speciality include cinema studies, transnational feminist theories, critical ethnic studies and trauma studies. Jelača's work has appeared in Camera Obscura, Cultural Studies/Critical Methodologies, Studies in Eastern European Cinema, Feminist Media Studies and elsewhere. She is a contributor for the Bosnia-based Buka Magazine. Dijana splits her time between New York City, Bosnia and Russia.