How seriously should we take political propaganda photography in the 21st century? Sanja Bjelica looks at Putin propaganda from a feminist angle.

The order of politics was created by men and for men, with no distinct consideration of a female perspective or for women in politics. Hyper-masculine leaders, like Russian president Vladimir Putin, continue to claim the political domain by setting the norms through image-building and muscular policies. It was only in the early 20th century, when women around the world slowly began to vote, that they were allowed behind the red velvet rope of politics. Suffice it to say that those who want to be in the upper regions of political power better man up, because politics is a man’s playground.

Politics breeds masculine domination, as made obvious by Angela Merkel’s androgynous pantsuits and how she was subject to public gossip only the one time she was photographed in a low cut dress in 2008. Margaret Thatcher is to this day described as aggressive and authoritarian in her leadership style, despite having been advised to ‘act more masculine’ to be perceived as a more powerful politician. While she was criticized for aggressive rhetoric, the same characteristics are considered to be normative and even encouraged when it comes to male leaders. Women who make it in politics are those who play by men’s rules, and win. Margot Wallström, the Swedish Foreign Minister, did not, when she recently addressed the elephant in the room by denouncing Saudi Arabia’s breaching of basic human rights. Her criticism of a system that is rooted in misogynistic traditions was not only honest, it is part of Sweden’s new feminist foreign policy. Since the announcement of the new Swedish foreign policy in September, many questions have arisen regarding the unusual combination of feminism and foreign policy. With the lack of support minister Wallström received for calling out Saudi Arabia, it is clear that most of those questions have remained unanswered. In my opinion, the only real value in calling the Swedish approach a feminist foreign policy is to mark that any other approach to foreign affairs is in fact not. There is still a lack of attention for female perspectives in foreign affairs.

Vladimir Putin is a textbook example of a politician who represents hard politics, masculinity and power, which by definition stand in complete opposition to femininity. His political strategy and methods are certainly not feminist either. In 2013, Putin signed a gay propaganda law which discriminates against liberal and feminist views of gender relations and sexuality. He flirts with the European extreme right parties, as well as the notorious womanizer Silvio Berlusconi, and has in recent years made advances toward the Western Balkans, hoping to find common ground in nationalism and conservatism. Ideologically speaking, the ultra-conservatives and the feminists in Europe are archenemies. The spread of Putinism has merely intensified the dichotomization between feminist political parties and the extreme right.

To emphasize Putin’s machismo in his private life, the Kremlin continues to release staged photographs of him playing with wild animals or practising ultra-masculine sports in his own time. Unfortunately, though, he might be giving masculinity a bad name by highlighting one extreme of masculinity, namely that of political conservatism, militarism and domination over the weaker.

In the culture of the Soviet Union, in which Putin lived for most of his life, the role of the breadwinner was central to a man’s concept of self. In her book Gender, State and Society in Soviet and Post-Soviet Russia (2000), Sarah Ashwin writes that there was a much smaller gap between men’s private and public lives back then. In Soviet Russia, “the acceptable boundaries of masculinity were policed in the public sphere by male friends and co-workers,”[i] meaning that their earnings and ability to provide for their families was a direct reflection of their masculinity both in the public and domestic spheres. A Soviet man with a high occupational status was often treated as a stronger patriarch in his family. Likewise, men in lower positions, who failed to deliver as breadwinners, lacked the same authoritative respect in their families. To a large extent, a man’s identity was determined by his position in the workplace, as the Soviet communist doctrine dictated that a person was primarily a worker, and secondarily a man or a woman. This partially explains why Putin’s image is so homogenously ultra-masculine.

The paradox in Putin’s masculinity is his own body, which he subjects to sexual objectification under the camera lens. In traditional societies, the female body is a sexual object, in contrast to the heterosexual male body, which is neutral, normative, and therefore not over-charged with sexuality. In photography, however, Putin’s bare body is a passive object. If bare-chested, the object is even more sexualized. As many of his predecessors and colleagues in politics, Putin uses his body as an expression of male dominance and power. Masculinities have always been part of political photography. Iconography used to be a trademark for Soviet propaganda. Both Lenin and Stalin, the two best-known powerful leaders of the Soviet Union, were frequently iconized as symbols of their nation. In the Soviet Union, where there was no public debate about homosexual men, a hard body signified a strong (heterosexual) leader. But for Western post-chastity generations of the digital era, with at least some awareness of the LGBT community, Putin’s overt upper body nudity borders on homosexuality. Despite having been intended for a Russian audience, Putin’s vacation photos, of him riding bears and fishing bare-chested, have reached the Western online community, for which Soviet ideals of masculinity invoke a completely different meaning.

Even a man like Putin is faced with mockery. If the core of his power depends on old Soviet ideals of masculinity, it might also be his biggest weakness. If the patriarchal culture, which upholds masculinity as dominating, somehow ever becomes endangered, Putin would be stripped naked of his weapon and left powerless.

No consumer of mass media is unaffected by political propaganda images and their unintended effects. Although most millennials have acquired some ability of critical thinking, the mere sharing of information conveys part of the original message. No amount of gay parodies or mockery could therefore replace the images of Putin riding a grizzly bear. They are engraved into our memory and stored as knowledge. On the other hand, our brains also store photoshopped images as knowledge. Therefore, the spread of parody pictures creates an ambiguous situation. First, it satirizes the object in the picture, Vladimir Putin, but it satirizes the subject alike, which in this case is homosexual symbolism. Mocking Putin through homosexual symbolism is thus at the same time mocking homosexuality through Putin. For most people, to whom Putin is merely a face on the news, a photoshopped image is just as real as one released by the Kremlin. All photographs we observe are turned into mental objects, which produce much of the knowledge that we have about the world. What we know about Putin is dependent on how he appears in the media – no matter the purpose.

Imagery is a powerful instrument of representation within the discourse of politics. Through photography, and imagery in general, political messages become eternalized. As Susan Sontag writes in On Photography, photography produces knowledge about the world, and knowledge is power. Images are manifestations of direct knowledge. Compared to words and actions, images are less dependent on interpretation, and are therefore perceived as objective truths. People believe what they see, which makes image-building crucial in political campaigning. It is not uncommon for male politicians to show physical strength as a variable of power in image-building. The Kremlin released a series of photographs of bare-chested Putin just before the 2007 presidential elections.

This style of Putinism has evidently caught on in Serbia as well. Last winter, a video of Serbian Prime Minister Aleksandar Vučić saving a child in a snow storm went viral on social media. The video did not merely receive criticism from media outlets, such as the satirical B92 program 24 minuta sa Zoranom Kesićem, but set off a trend of YouTube parodies among private users mocking Vučić’s clearly staged attempt to score some points with the public. Nevertheless, it left some impact and surely increased Vučić’s visibility in online media. To be fair, it might just be the most exciting video featuring Prime Minister Vučić.

No parody can overwrite the underlying message that political propaganda conveys. Putin’s critics are just as much contributing to the shaping of his masculine image as the Kremlin itself. Russian state media distribute photographs, but the public discussions that follow, in Russian as well as Western media, contribute to his image. To the average mass media consumer, Putin is a shirtless bear-riding hunter, whether we choose to believe it or not. As Susan Sontag would argue, unlike written messages that undergo levels of interpretations, photographs are pieces of the world rather than interpretations of it.

The vacuum that was created during Putin’s ten days of media absence in March caused global concern and uncertainty. In an article in The Washington Post the author rightly noted that the public reaction is a result of Russia’s centralized power around Putin. Being the sole face of Russia, a ten-day strike from the public eye affects the public perception of Russia itself. Through the power of photography, Putin is singlehandedly shaping the image of contemporary Russia. In politics, appearance is everything; words are secondary. This has never been truer than in the image-driven culture of the 21st century, when, in true nihilistic spirit, we don’t believe in what we cannot see.

His hyper-masculine image is echoed, even emphasized, in what might be the contemporary equivalent to having an action figure – Putin’s own TV-character. In season three of the political TV drama House of Cards, a fictional Russian president, named Viktor Petrov, plays the part of a womanizing brute, the political opponent of the US president Frank Underwood. Petrov bears a striking resemblance to the actual Putin. With cold stoutness, both fictional and actual Putin radiate dominance, vanity, and what can only be described as a macho demeanour. Since everything is possible in fiction, an additional element has been added in the TV-show: height, one of the few masculine characteristics the real Putin does not possess. It is quite possible that by the logic of media manipulation, the surplus height could strengthen the image of the real Vladimir Putin.

Once we have stored a picture of Putin in our memories, it begins to facilitate meaning, and the more we see of it the more rooted it becomes. For the generations of the digital era, for whom the digital and analogue worlds are merging, reality is relative. 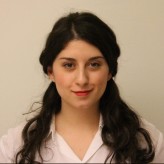 Sanja was born in Sarajevo in 1989 and grew up in Sweden. After completing her undergraduate studies in English Literature at Malmö university, she moved to Berlin. She continued her graduate studies in International Relations and worked in political PR. She specialized in Culture and Gender Studies and wrote her master thesis on the representation of masculinity in Putin. During her time in Berlin, she developed a deep interest in the socialist cultures of the GDR and the Soviet Union. She loves languages and culture and sees it as her duty to re-discover the best from the past through music, photography and art.