In Turkey football and politics are often peculiarly intertwined, as was shown once again this May Day. Find out what this means for Erdoğan’s precarious claim to power, the rapidly approaching general elections on June 7th and the state of Turkish politics as a whole.

Another May Day came and went in Istanbul with much of the same old—police force used to suppress demonstrations on the “Worker’s Holiday”. This year, however, there was a little bit of an international feel to it all in the wake of the Baltimore riots back in the USA. The U.S. Ambassador to Turkey, John Bass, kicked it all off with a photoshopped picture of himself with blonde hair in response to comments made by Ankara’s AKP mayor Melih Gökçek who tweeted “Where are you stupid blonde, who accused Turkish police of using disproportionate force?” The uncouth comment was directed at U.S. State Department spokesperson Marie Harf, as Mr. Gökçek was—apparently—still seething over the fact that the U.S. had criticized Turkish police for using disproportionate force during the Gezi Protests two years ago. Mr. Gökçek is indeed an interesting character, and football fans will know him better as the man who buried the famous football club Ankaragücü in debt after his son, Ahmet Gökçek, became chairman (with a little of his father’s help, naturally).

As for the May Day itself the football fans from Beşiktaş’s Çarşı group kept up their civic duty as they entered the celebration on Beşiktaş’s square much to the delight of onlookers.

I say celebrations because only in Istanbul does May 1 become a war zone… still, there was some time for football on Istanbul’s blockaded streets.

A week after May Day’s violence President Recep Tayyip Erdoğan scheduled an AKP rally on May 9 for a “general opening ceremony” (it is still unclear as to what was being unveiled) in the Izmir Ataturk Stadium, one of Turkey’s largest stadiums, in order to galvanize his support in a province that has never voted for him. The pictures tell the story; in some shots it seems as if there are more police than citizens and even the decision to move people from the stands onto the playing surface failed to produce the illusion of a large boisterous crowd. Before the rally, Mr. Erdoğan said that AKP supporters wouldn’t be able to fit in the stadium. But, of course, there is a reason: The AKP’s Izmir province president Bülent Delican said that the low turnout was the fault of Izmir’s governor and vowed that “The happiness of those who criticize us will be short lived. The AKP organizations will reckon with those who are now smiling on May 24 at Gündoğdu [a main square in Izmir where the AKP is planning a major rally]. The AKP have 466 thousand members in Izmir. We can fill nine stadiums like that one”.

Maybe they can. But the issue at hand is not whether or not the AKP can fill stadiums with boisterous supporters; the issue is the rhetoric used by representatives of the AKP. The AKP member quoted above, Mr. Delican, makes no effort to mask the contempt he feels for his political opponents. Such vitriol has no place in a democratic society whose President is—ostensibly—expected to represent all members of a country, not just those that voted for him or her. Unfortunately the events of May 2015 were not anomalies, they are just further indications that the AKP is looking to cement its hold on Turkey before elections in June, and that criticism—or even lack of support—will not be taken well.

This hardline rhetoric in the run up to parliamentary elections on June 7th may have something to do with fissures that have begun to appear within the AKP and events that have threatened the party’s hold on the country. Lost in the chaos of May 1 an Istanbul Judge, Mustafa Başer, found himself behind bars after granting bail to police officers who uncovered a damaging graft scandal within the AKP in December of 2013 as part of the AKP/Gülenist rift. Later, one day before the Izmir rally, on May 8 2015, President Erdoğan took a shot at his predecessor and former right hand man, Abdullah Gül, for his “football diplomacy” in 2008. Mr. Gül had visited Armenia to attend a World Cup qualifying match between Turkey and Armenia in a bid to thaw relations between the two countries, but Mr. Erdoğan told historians attending a meeting closed to the press that Mr. Gül’s attempt to soften relations actually “gave the other side [the Armenians] a trump card allowing them to pressure us”. Mr. Gül chalked it all up to a “misunderstanding”, but there seem to be deeper issues facing the party.

Indeed on May 28 2015 municipal trucks delivered 50 tons of onions to citizens of Zonguldak province’s Kozlu district on the Black Sea coast, a move some saw as a way to win over frustrated voters as the AKP looks to consolidate its support. Kozlu was only recently made its own district in 2012 and has an AKP Mayor while Zonguldak Province itself is run by the opposition CHP, but there are more reasons for the AKP to fear losing votes in Zonguldak than just the political divide: Zonguldak is a coal mining center where 30 miners lost their lives in a mine explosion in 2010, four years before the Soma mine disaster killed over 300 and delivered a blow to the AKP’s support base in rural Turkey.

And the fissures have not been confined to the AKP itself. The violence surrounding Turkish football has become increasingly prevalent in recent years and the issue came to a political head on May 22 2015 when Turkish media reported that football clubs in eastern Turkey are planning to set up a new league. A playoff match in the fourth tier of Turkish football, the Spor Toto 3. League, between Yeni Diyarbakirspor (from the largest city in Turkey’s Kurdish southeast) and Denizli Büyükşehir Belediyespor (from Turkey’s Western Aegean coast) ended in violence after a penalty was awarded to Denizli Büyüksehir Belediyespor. The fans of Yeni Diyarbakirspor fought with police and club president Fevzi Ilhanlı announced a decision to “quit the league”. Now 24 teams from eastern Turkey are looking into forming their own separatist league apart from the one run by the Turkish Football Federation. One need only look at the disintegration of Yugoslavia to understand the troubling precedent in sporting and political terms, and it is certainly a stunning slap in the face of the AKP’s attempts to reconcile with Turkey’s large Kurdish population.

The period before elections in any country are fraught with tension, but taken all together May in Turkey has been eventful. The AKP is facing challenges from within the party as well as in the country during the run up to what may prove to be the most difficult election cycle for Mr. Erdoğan since rising to power in 2002. 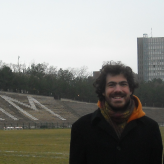 John Blasing is an avid football fan interested in traveling the world in search of football stadiums and football shirts. He holds a B.A. in International Affairs from the University of Colorado at Boulder and an M.A. in Middle Eastern Studies from the University of Texas at Austin where he wrote his thesis on the history of the relationship between politics and football in Turkey. He speaks fluent English and Turkish as well as enough Farsi, French, and Tajik to get by with. You can find him in the United States or Turkey, depending on the time of year, and always at http://thisisfootballislife.wordpress.com.