Six months ago rumors emerged that the ethnic Armenian minority in Georgia was lining up at the Swiss Embassy in Tbilisi to obtain Russian passports. Russia has no embassy in the Georgian capital; its interests are represented by the Swiss Embassy. As Russians had handed out passports to residents of Georgia’s breakaway regions of Abkhazia and South Ossetia before the wars there in 2008, the situation in Tbilisi this past spring raised the spectre of a potential repetition of this situation — particularly given that it came on the heels of the Russian invasion of Crimea in February 2014, where Russians had again been handing out passports for years before the conflict reared its head.

Nevertheless, the allegations were never substantiated despite attempts to verify the veracity of the story.

The issue popped up again in the wake of a new law passed in March that tightens visa regulations for foreign passport holders in Georgia. The official rationale for these changes was that Georgia was becoming more European, and as such, was required to comply with European Union regulations; it was also in order to receive visa ‘liberalization’ for Georgian citizens making short trips to the European Union. However, the law is in fact a mass of contradictions, with a lot of room left open for interpretation. The authorities issued a handout in English [pdf] soon after the law was passed, but it left people just as confused as they had been before.

The law itself was not the only problem. The law was scheduled to be implemented by September 1st, 2014. Less than a week before the deadline, Georgia’s Foreign Ministry was still struggling to clarify both what the law said as well as what foreigners needed to do to comply. It soon became clear that no training was provided to the staff who were charged with taking documents. People who went to register were turned away and told they were not required to do so. When they were allowed to register, they were told additional documents were needed, although the law did not require this. One individual from a Western European country spent an exorbitant amount of money to obtain documents from their home country, only to be informed that they were not necessary.

However, the bureaucratic aggravations faced by ex-pats with passports from places such as the European Union, the United States, and Canada, were nothing compared to the problems faced by nationals from other countries. Citizens from hotspots like Syria and Iraq had their applications denied despite meeting the legal requirements.

Meanwhile, according to a recent article in Hetq, an independent Armenian publication, some residents of the southern Georgian region of Samtskhe-Javakheti have found themselves under the same restrictions that face foreigners living in Georgia; and are just as misinformed about their options and rights under the new residency law.

The region of Samtskhe-Javakheti sits between the borders of Armenia and Turkey. Ethnic Armenians make up the majority population of the area; their families have resided there for centuries, and they maintain a distinct cultural identity. Many cannot speak Georgian, despite the fact that it is the official state language of Georgia.

The federal government has made some attempts to introduce opportunities to better integrate the Samtskhe-Javakheti Armenians, including a bilingual education program. However, the program received textbooks but no teacher training. As many local teachers have a poor grasp of Georgian themselves, the result of the program has been uneven at best. In a country with an already high unemployment rate (the Georgian government estimates it to be nearly 15 percent), opportunities for finding work in the local economy are slim. And the lack of Georgian language skills makes it difficult to migrate to urban areas in search of work. A Russian military base in the town of Akhalkalaki employed approximately 2,000 local residents until it was transferred to Georgian control in June 2007. The revenue from the base had supported nearly half of the local population. With few options left open to them at home, people began to engage in migratory labor. A travel agreement between former countries of the Soviet Union eased the way. The agreement allows a passport holder to travel within the region for 90 days at a time without going through the often-arduous process of obtaining a visa. Much of the money earned through migrant labor is sent back home in the form of remittances.

Georgia walked away from the agreement after its 2008 war with Russia. This decision made it more difficult for people with Georgian passports to travel within a region they had grown used to doing business in, and greatly impacted the Georgian economy. As a result, an unknown number of Georgian residents of Armenian background took Russian passports. As dual citizenship is not allowed under Georgian law, they were then obligated to relinquish their Georgian citizenship. More privileged foreigners have found ways around this. For example, the authorities often look the other way if the foreigner’s investment into the Georgian economy is great enough. However, with ethnic tensions between Georgians and Armenians, and with the economically and socially marginalized position of Javakheti Armenians, they have essentially been denied this option.

On a visit to Georgia earlier this month, the Speaker of Armenia’s parliament brought this issue to the forefront, but the Georgian government has not reacted so far. The government in Tbilisi should reassure locals about their legal status in Georgia. Otherwise, by pursuing policies that disenfranchise its own people, the government in Georgia runs the risk of racial tensions spiralling out of control. And Georgia’s worst fears could be realized with another Russian invasion to protect its citizens.

All photos of the Samtskhe-Javakheti region by Sedrak Mkrtchyan/CC-BY-NC-ND 2.0 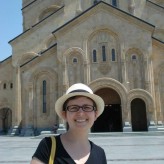 A long-time Russophile, Nina Jobe has blogged about Russian politics since 2006. She has been active on Twitter as @NinaIvanovna since 2009. Her interests include social media, human rights, corruption, security, & terrorism, particularly in Russia's North Caucasus. She is a contributor to Global Voices' RuNetEcho project, and blogs at ninajobe, where she gives daily updates on news in the post-Soviet space, and analyzes it. Her current focus is the conflict in Ukraine.