Over the last few days, a lot of people have asked prominent Sarajevo-based activist Darko Brkan about the protests in Bosnia and Herzegovina. These are his suggestions.

1) Declare Victory for the Citizens of Bosnia and Herzegovina

It should be stated clearly that everything that has happened so far, and especially the resignations of four cantonal governments, is a collective victory for the citizens of BiH. After these events, it will be clear to anyone in power that they will meet the same destiny, and even harder and faster, if they even think of continuing with the same old political practices. Plenums, or other types of gatherings and collaboration, can be used as a place for organizing further prompt citizen actions, in case one day the government forgets everything that is going on right now.

We should demand the urgent and obligatory cessation of all investigations against citizens who took part in the protests, as well as the resignations of the police commissary and the spokesperson for the interior ministry. The government must not harass people and conduct police and judicial witch-hunts against disempowered citizens.

3) Establish Provisional Governments in the Cantons

We should ask the parliaments in these four cantons (and others, if possible) to make all elected parties take responsibility for the current situation by forming all-party coalitions until the scheduled October elections take place. This way, all parties will be accountable for the actions of the executive branch, and they’ll execute power in accordance with the percentage of votes they already have in their respective parliaments. This would be a better solution than appointing the so-called “expert governments” that some suggest, because the parties will actually have to take responsibility for what goes on in the next several months. And they will have to work hard, without having the convenience of placing the burden of liability on citizens or some non-partisan “expert governments”, which can’t do much in the next five or six months before the elections anyway. (It’s also unclear how exactly these experts would be appointed).

The provisional governments would need to focus on specific assignments, which would be possible to accomplish in several months. For example: restrict salaries in public institutions and state-owned companies based on the local average, revise and restrict all privileges public officials now enjoy, open up the discussion on the revision of privatizations, refrain from taking out any further loans, re-evaluate different subsidies and the like. (We’d still have to keep it realistic, and see what can be done in a relatively short period).

We should ask all parties to clean up their governing bodies and candidates’ lists, and leave out all of those who’ve been responsible for governing the country so far. Therefore, internal lustration within the parties would be a pre-condition for being accepted as a relevant and legitimate political player, and to be even considered as a candidate in the next elections.

And then, during the October elections, we’ll be able to get rid of all the politicians in Bosnia and Herzegovina who have been smothering us for the past 20 years. Our task would be to build an even better and more accountable citizen movement, and to start reading laws and understanding legislature so we can improve and debate them.

Those are my two cents.

Darko Brkan’s sign reads “Citizen of BiH before anything else” 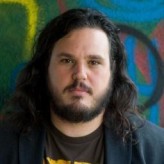 Darko Brkan is the founding president of ZastoNe?, a Sarajevo-based NGO that promotes civic activism in Bosnia and Herzegovina. In addition, he is a founding member of Dosta! (Enough!), a prominent citizens' movement for social justice and government accountability.