Notes from the trial of Radovan Karadžić, by a former intern for his defense team.

What did we fight for? What do we fight for today? To put it in even simpler terms, was it worth it?

Sitting in the public gallery at the ICTY, observing the man I “worked” for over the summer, these questions were pressing. To the left of me sat my Canadian boyfriend, and just beyond him, three Bosniak women, representing the Mothers of Srebrenica. They dabbed their eyes and muttered insults at the man that the world has come to know as the “Butcher of the Balkans”. Radovan Karadžić, the former President of Republika Srpska within Bosnia and Herzegovina from 1992-1995 has been demonized and chastised by the world for the alleged war crimes he took part in. He is said to have not only perpetuated war crimes, but took part in orchestrating the biggest genocide since WWII.

As a first generation, Canadian-born Serbian, I question the validity of the Prosecution’s arguments. I question the intent of media outlets that portray the Serbian nation as one teeming with war criminals and drug traffickers. I criticize people who place one hundred percent of the blame on the Serbs for committing atrocities. I get enraged by the fact that this discourse is partly why my family in Serbia lives in mediocre, depressed socio-economic conditions.

Yet, as a Western-educated, ambitious woman I recognize the mandate of the ICTY in achieving transitional justice. I do not characterize the tribunal as illegitimate for failing to prosecute more Bosniaks and Croats. My conflicting biases and experiences leave me, and people like me, with uncertainty. In a world where people’s suffering can be viewed, analyzed and criticized at a moment by literally millions of people, I feel that my experiences are limited, dare I even say worthless.

Yet, this personal conundrum that has plagued me for as long as I can remember — one caught between a “Western” and “Eastern” perspective — is a universal one. “What did we fight for?” necessitates a critical discourse on history. “What do we fight for today?” is imperative to understanding how the prevailing world order has shaped our respective nations.

Lastly, “Was it worth it?” Observing a seemingly ordinary man in the Hague, behind the bullet proof glass of the courtroom, contrasted with victims of genocide who will never be able to touch their loved ones, this question seemed most poignant. Underpinning this question of worth lies the assumption that human suffering can be legitimated. Today, Bosniak, Serb and Croat rhetoric continues to justify the violent behavior of soldiers and politicians on all sides. It is my hope that when the sufferings of thousands of Bosnian-Muslims are mentioned, Serbs do not argue defensively about the suffering of their own people. This legitimated discourse on violence inhibits trans-ethnic empathy. As a part of humanity, we must critically address this justification. Perhaps then we can empathize with the victims of violence, irrespective of their nationalities. 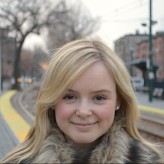 Jelena Djuric was born in Toronto, raised between Serbia and Canada, and is studying peace, conflict and justice studies at the University of Toronto. Currently pursuing her B.A., she aspires to transition in to international law in the future.