What is the latest in the saga of the Serbia-Albania European Championship qualifier? Jack Robinson analyses Friday’s ruling by the CAS.

On Friday morning, an announcement by the Court of Arbitration for Sport (CAS) appeared to write the final page in the story of a European Championship qualifier that has morphed into a saga of its own. The game itself lasted a mere 41 minutes, at which juncture the referee suspended the match for a second time due to flares littering the playing surface. What followed were some of the most bizarre and chaotic scenes ever seen inside a football stadium.

A remotely operated aircraft carrying a politicised flag was torn from the sky, players tussled over it, home fans invaded the pitch to join the fray. The visiting players resisted before running to the haven of the dressing room, pelted with coins and assaulted by stewards on the way. They never re-emerged and the match was abandoned. The game, of course, was Serbia v Albania in Belgrade last October.

Finding some kind of resolution to the mess left behind by the events of that night has been a nine-month carnival of accusations, recriminations, confusing official decisions and appeals. UEFA acted swiftly, bringing charges against the Albanian (FShF) and Serbian (FSS) football associations the day following the abandonment.

Ten days later, a UEFA disciplinary panel took the seemingly counterintuitive action of awarding the match 3-0 to Serbia whilst simultaneously docking them three points, as well as fining both the FShF and FSS €100,000. Both associations immediately appealed the decisions; firstly to UEFA who rejected both appeals, resulting in a second appeal by both federations to the CAS.

In a statement on their website coloured with claims of discrimination, the Serbian association claimed no precedent existed for a team simultaneously being docked points and awarded a match. They also pointed out similar sanctions would be impossible in play-off matches.

These criticisms of UEFA’s verdict seem to make a fundamental mistake of interpretation, viewing separate elements of the judgement as intrinsically connected, when they weren’t. The FSS were fined €100,000 and docked three points as punishment for inadequate organisation at the stadium and the behaviour of the home crowd.

They were awarded the match due to the Albanian association being found guilty of the entirely separate charge of refusal to play. The FSS seemed to believe that Albania’s guilt in this charge negated their own. It didn’t. Both teams received two separate punishments in two separate cases, no winners and losers, no victims and perpetrators. The CAS dismissed the FSS’s appeal, upholding UEFA’s decision and confirming the original punishments.

The Albanian appeal was based on an insistence of innocence on the two initial charges brought against them by UEFA: ‘the display of an illicit banner’ and ‘refusing to play’.

UEFA’s stance against illicit banners isn’t a test of stadium security. It’s supposed to help to maintain the game’s stance as apolitical and universal by keeping ills such as racism and homophobia out of the stadium. The most effective way to clamp down on the display of banners that contravene this doctrine is to punish the clubs and associations that the owners are aligned with, as opposed to witch hunts to find individuals, for which UEFA lacks the resources.

The FShF argued that in the absence of away fans, all responsibility for security inside the stadium rested with the organisers, the FSS. The CAS begged to differ and upheld UEFA’s ruling that the banner was both illicit and the FShF’s responsibility, leaving Albania with the €100,000 fine that it is yet to pay.

The second charge of ‘refusing to play’ had always been the most contentious. Essentially, UEFA had deemed the Albanian side responsible for the match’s abandonment. As punishment for numerous alleged refusals to cooperate with attempts by match officials to resume the game, Albania had forfeited the match, which was awarded 3-0 to Serbia.

An FShF press release following the decision expressed the outrage felt by many Albanian supporters at the notion of resuming the game. It pointed to lack of security within the stadium and injuries sustained by their players during the pitch invasion. Regardless, if UEFA officials present at the stadium had made the decision to continue and were met with refusal by the Albanian delegation, they were still liable to the charge and its punishment: a forfeit and 3-0 defeat.

However, the FShF press release went on to make an even more remarkable claim, that the Albanian players were never notified that the officials had decided to resume the game. The statement described this position as “pure fantasy” and stated categorically that “The Albanian team never refused the resume [sic] of the match.” A direct contradiction of the UEFA charge.

The Court agreed, stating that the CAS panel were “unable to ascertain to its comfortable satisfaction that the referee issued a clear, direct and unconditional order to the players to resume the match.” This indicates a breakdown in communication that surely reflects on worse on UEFA than on either sides’ national federations. The CAS panel’s findings continued to echo the FShF’s statement, concluding that “the match stoppage and the eventual abandonment of the match were caused by security lapses of the organizers and acts of violence exerted on the Albanian players by the Serbian fans and at least one security steward.”

The FShF’s appeal successful, the CAS overturned UEFA’s ruling that Albania’s refusal to play caused the match’s abandonment. The forfeit and 3-0 loss were revoked. Albania’s good news didn’t end there, though. The court went even further, finding that the responsibility for the abandonment in fact lay with the Serbian football association and enforced the exact same punishment on the FSS, a forfeit of the match and 3-0 loss.

The decision has completely redefined both nations’ campaigns to qualify for Euro 2016. Serbia now prop up Group I, last in the table on -2 points. Any faint hope they had of qualification is now completely extinguished. Even victory in all three of their remaining games will not secure them the third place finish needed for a place in the play-offs. Albania, meanwhile, now lie in second place, level with Denmark on 10 points and just two points behind group leaders Portugal having played a game less. A single point from their remaining four games will be enough to guarantee a third place finish with a top two finish and automatic qualification now a very distinct possibility.

Albanians rejoiced at the announcement, draping double headed eagles over the plaque outside the CAS office in Lausanne and gathering in downtown Pristina and Tirana to celebrate. For their part, Serbs added this decision to a litany of perceived injustices at the hands of international sporting bodies stretching back to Yugoslavia’s expulsion from Euro 92.

The news also sparked an emotional Twitter spat between the two nations’ prime ministers. Serbian Premier Aleksandar Vucic kicked things off, hollering at Albanian counterpart Edi Rama, “we will win the match, without drones and anybody’s help, in the stadium in the very heart of Tirana”. Rama replied to this top-level banter by reminding him the game will in fact take place in Shkodra. Burn.

Let’s hope this one makes it to the final whistle. 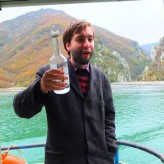 Jack Robinson is a football writer focusing on matters on and off the pitch in the Balkans.