On June 27, around 200 activists, supporters, friends and allies marched in solidarity against LGBT discrimination in the main streets of Belgrade, taking part in a series of equal rights campaigns across the Balkans this May and June.

For the second year in a row, the march’s guiding message was Zona Slobodna Od Mržnje or “”Hate-Free Zone.” “”Hate-Free Zone” comprises a campaign that has been held in various locations, each time in memorial of a different hate crime.  This year, participants solidified the relationship between the LGBT and Roma rights movements by dedicating the walk to the 1997 murder of a Roma boy, Dušan Jovanović.  Organizers including Women in Black (ŽUC), Gay Straight Alliance (GSA), IDAHO Belgrade, Gay Lesbian Info Center (GLIC), Association “Rainbow”, Center for Queer Studies (CKS), Novi Sad Lesbian Organization (NLO), “Hestia” Organization, and Lawyers’ Committee for Human Rights (YUCOM) envisioned the “Hate-Free Zone” as a statement against far more than LGBT discrimination alone. According to the Serbian Gay Straight Alliance, marchers demonstrated against “all forms of xenophobia, racism, homophobia, chauvinism, hatred, and intolerance.”

International leaders and locals alike welcomed the event. The Serbian GSA reports that Deputy Prime Minister and Minister of Public Administration and Local Self-Government Kori Udovički, The Council of Europe Office in Belgrade, The EU Delegation in Serbia, and the OSCE, among others, declared official support for the event.  Participant and activist with the International Day Against Homophobia and Transphobia (IDAHOT) (IDAHO Belgrade) Lazara Marinković told Balkanist that marchers had no clashes with authorities or passerbys; on the contrary, “a lot of people greeted the participants, waving or taking pictures of flags and banners.”  She says, “positive curiosity would be the best words to describe their reactions.”

The march comprises a climax of LGBT events across the Balkans in recent months. Despite a lack of funding, IDAHO Belgrade organized a series of programs on the status of the Serbian LGBT movement with a particular focus on educating the public and promoting the arts.  According to Marinković, these events “mapped and promoted the existing local queer art practices and investigated the status of local production in this field.”

IDAHOT day was marked in Banja Luka, Bosnia and Herzegovina with a similar program, which was attended by U.S. Embassy, Council of Europe, and European Union representatives, and protected by local authorities. The event included two speakers from the trans community who wish to remain anonymous to protect themselves against potential threats. Each speaker, strikingly willing to make himself vulnerable to the audience, shared the story of his transition.  Of special note were the speakers’ experiences in Bosnian society, including professors’ refusals to address them by their chosen gender identity.

Marinković told Balkanist that several additional events organized by IDAHO Belgrade are underway for this summer and fall. As with the June march in Belgrade, Marinković reports that thus far, the organization has cooperated with local authorities and experienced no incidents of violence.

LGBT activists and supporters also look forward to a potential pride parade in Belgrade this autumn. (Originally scheduled for May, the parade was delayed due to Serbia’s devastating floods.)

It remains unclear whether pride parade participants will experience the same support from authorities and locals that characterized this spring’s events — or whether they will be allowed to march at all. 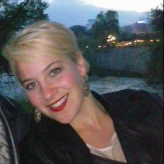 Dana McKelvey serves as managing editor and contributor at Balkanist, and has also written for Al Jazeera America, Pulitzer Center on Crisis Reporting, and Diplomatic Courier. Dana served as the 2013-2014 Fulbright scholar in Banja Luka, Bosnia and Herzegovina, and has also resided in Sarajevo where she taught English and film production to local students through The College of William and Mary Bosnia Project.