The women on stage are smearing their faces with black.  It looks like paint or oil. It glistens under the lights. This is the second time I’ve seen someone do this in the space of a week. It happened in the final moments of Sebastijan Horvat’s On the Grave of Ignorant Europe, the closing performance of this year’s BITEF – the Belgrade International Theatre Festival, celebrating its half century this year – and also during Ridiculous Darkness, a production by Vienna’s Burgtheater, that played earlier in the festival at JDP.

In both pieces the performers were othering themselves, using their skin both as a canvas and a placard. In the absurd, turbulent, sometimes funny, sometimes frustrating Burgtheater piece, this was done with a degree of humour, the cast crooning The Lion Sleeps Tonight while breaking the set into pieces and feeding it, plank by plank, through a wood chipper.

This blacking of the skin was done with more solemnity in Horvat’s piece for the National Theatre of Croatia – and to underline the point further one of the actors begins to quote Caliban’s speech in The Tempest “I know how to curse.”

The UK-based, Europhile critic, Andrew Haydon has already engaged with this knotty, problematic act, a recurring trope in European theatre at the moment, unpicking his own response to it in some detail. Like him I bring my own cultural baggage with me, of race, class, privilege and Englishness.  As a woman of Serbian parentage, born and raised in the UK, with only a loose grip on language, this is the frame I watch work through, something I’m invariably more aware of when I’m watching work in Belgrade.

Founded 50 years ago by Mira Trailović and Jovan Ćirilov, the festival during the Cold War years provided a window onto the European avant-garde scene of the 1960s and 1970s. Now under the artistic directorship of Ivan Medenica it remains a vital creative space.

The festival, which this year took place between 24th September and 2nd October, is spread across Belgrade. There are performances at the National Theatre, JDP, and Atelje 212, as well as the Dom Omladine and, my personal favourite, the Bitef Teatar, in Dorcol. The closing performance took place in the bright, white Madlenianum opera house in Zemun. (For non-Serbs this is a privately owned space, named for its patron Madlena Zepter, the wife of a prominent Belgrade businessman. The space is, according to its own far from humble website, “the best thing to happen in Serbian theatre life since Prince Mihailo Obrenovic built Belgrade’s National Theatre in 1868.”)

From my inside-out perspective it seemed that there were a number of themes running through the 12-show main programme. Medenica and curator Anja Susa have gone about their work with care. One of the main themes that emerged was an examination of our ability to empathise with people other than ourselves – where do the limits of compassion lie? The migrant experience was the most obvious focus here, explicitly addressed, but the questioning went deeper.

The programme also included a couple of pieces by local emerging artists, performed at the BITEF Teatar. I was particularly taken by a piece by Maja Pelević and Olga Dimitrijević. Having spent this August, as I spend every August, at the Edinburgh Fringe, their show Freedom: The Most Expensive Capitalist Word, chimed with a lot of the work I saw there. Freedom took the form of a photo documentary of a trip taken by Pelević and Dimitrijević to North Korea. In a casual, conversational (and admirably bilingual manner – they slid with enviable ease between English and Serbian) they discussed their experiences of being tourists in Pyongyang. They paused in their account to sell ‘authentic’ souvenirs from North Korea to the audience. They called these interludes ‘Shopping Time.’ For increasingly high sums you could purchase a North Korean bathing suit, some potent, throat-burning snake-skin liquor (I passed on this). These sequences were similar to scenes in the 20thanniversary revival of Mark Ravenhill’s influential play Shopping and Fucking which opened last week in London.

Freedom was a slightly cluttered piece, but its clutter was thought-provoking. The piece concluded with a (admittedly overlong) fusion of dance and video in which Pelević and Dimitrijević dressed in North Korean uniforms and stood in front of projections of what, we were told, was video footage they filmed covertly in Pyongyang. They ended the show by flipping everything they’d done on its head: they were lying to us, at least in part. While they’re far from the first to employ this device, some of the things they addressed with the piece were really resonant, particularly the question it raised of how hard it can be, as inhabitants of the 21st century, to imagine alternate ways of living, to think collectively.

Milo Rau’s Compassion: The History of the Machine Gun, which was probably the most precision-engineered piece of the whole festival. Performed by Consolate Siperius and Ursina Lardi, filmed in tight close-up, the Shaubuhne production was surgical in its exploration of the hypocrisy of humanitarianism.

While I saw it back in May and not at Bitef, and therefore experienced it without subtitles, in a language half-learned and half-understood, Andras Urban’s Patriots – a blackly comic and accusatory production of a 19th century satire about hypocrisy, cultural identity and warfare – remains one of the most exhilarating pieces of theatre I’ve seen all year.

Horvat’s closing night production was a much blunter thing in comparison. A wealthy family sit around a dining table, untethered from time and unable to leave (this reminded me a little of the ending of Kusturica’s Underground, though instead of eternal wedding this was a tedious affair punctuated by the clink of cutlery and crackle of the gramophone).

The children of the family are encouraged to ape the mannerisms of the poor and destitute, to hunch and cough and gobble their dinner from the floor, as their parents beam down at them. Then things begin to shift and they become people desperate for a menial job at a hospital, then, eventually, a group of refugees huddled together on a tiny boat, frightened. The piece concludes with a scene of chaos and violence, complete break down and collapse that, by its end, has transformed once more into a kind of séance. It was a big, busy production, full of images and ideas, hard as a hammer in its delivery.

But while it was in many ways a blunter piece than the Rau or the Urbam it does feel like bluntness has its place on the stage. Some things need to be shouted about. 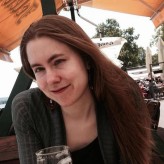 Natasha is a London-based journalist and theatre critic. She’s the Reviews Editor of The Stage, the co-founder of Exeunt magazine, and a sometime book reviewer and writer of short stories.