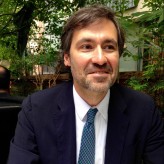 Marko Prelec is Executive Director of Balkans Policy Research Group and was the last director of International Crisis Group's Balkans Project, from 2009 to 2013. He trained as a historian of Southeastern Europe at Harvard, holds a Ph.D. from Yale University and has taught at the United States Naval Academy. From 1999 to 2005 he was Research Officer at the International Criminal Tribunal for former Yugoslavia, and from 2005 to 2008 he was chief of the Research and Analysis Section in the Office of the Prosecutor of Bosnia and Herzegovina.